Search Results for: all over the map

What's a wise, witty travel writer to do when she reaches forty and is still single? Wander the globe searching for romance and adventure, of course. On a trip to Oaxaca, Mexico, to celebrate her fortieth birthday, Laura Fraser confronts the unique trajectory of her life. Divorced and childless in her thirties, she found solace in the wanderlust that had always directed her heart—and found love and comfort in the arms of a dashing Frenchman. Their Italian affair brought her back to herself—but now she wonders if her passion for travel (and for short-lived romantic rendezvous) has deprived her of what she secretly wants most from life: a husband, a family, a home. When her Parisian lover meets her in Oaxaca and gives her news that he’s found someone new, Laura is stunned and hurt. Now, it seems, she has nothing but her own independence for company—and, at forty, a lot more wrinkles on her face and fewer years of fertility. How is Laura going to reconcile what seem to be two opposite desires: for adventure, travel, great food, and new experiences, but also a place to call home—and a loving pair of arms to greet her there? And so, she globe hops. What else is a travel writer to do? From Argentina to Peru, Naples to Paris, she basks in the glow of new cultures and local delicacies, always on the lookout for the “one” who might become a lifelong companion. But when a terrible incident occurs while she’s on assignment in the South Pacific, Laura suddenly finds herself more aware of her vulnerability and becomes afraid of traveling. It seems as if she might lose the very thing that has given her so much pleasure in her life, not to mention the career she has built for herself as a world traveler and chronicler of far-flung places. Finding herself again will be both more difficult and more natural than she imagined. Ultimately, Laura realizes the most important journey she must take is an internal one. And the tale of how she reaches that place will captivate every woman who has ever yearned for a different life.

A lavishly illustrated collection of forty-two profiles of Texas music pioneers, most underrated or overlooked, All Over the Map: True Heroes of Texas Music covers the musical landscape of a most musical state. The first edition was published in 2005 to wide acclaim. This second edition includes updated information, a bonus section of six behind-the-scenes heroes, and fifteen new portraits of Lefty Frizzell, Janis Joplin, and others, spanning such diverse styles as blues, country, hip-hop, conjunto, gospel, rock, and jazz. D.J. Stout and Pentagram designed the reborn edition, with photographer Scott Newton providing portraits. Michael Corcoran has been writing about Texas music for more than thirty years, for the Dallas Morning News and Austin American Statesman, as well as in such publications as Texas Monthly and Spin. These pieces are based on his personal interviews with their subjects as well as in-depth research. Expertly written with flair, the book is a musical waltz across Texas.

Robert Hughes once described Michael Sorkin as “unique in America––brave, principled, highly informed and fiercely funny.” All Over the Map confirms all of these superlatives as Sorkin assaults “the national security city, with its architecture of manufactured fear.” 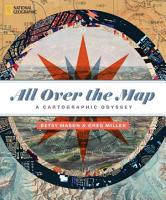 Created for map lovers by map lovers, this rich book explores the intriguing stories behind maps across history and illuminates how the art of cartography thrives today. In this visually stunning book, award-winning journalists Betsy Mason and Greg Miller--authors of the National Geographic cartography blog "All Over the Map"--explore the intriguing stories behind maps from a wide variety of cultures, civilizations, and time periods. Based on interviews with scores of leading cartographers, curators, historians, and scholars, this is a remarkable selection of fascinating and unusual maps. This diverse compendium includes ancient maps of dragon-filled seas, elaborate graphics picturing unseen concepts and forces from inside Earth to outer space, devious maps created by spies, and maps from pop culture such as the schematics to the Death Star and a map of Westeros from Game of Thrones. If your brain craves maps--and Mason and Miller would say it does, whether you know it or not--this eye-opening visual feast will inspire and delight. 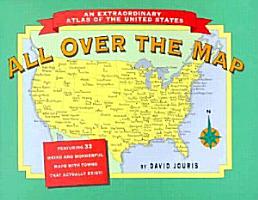 An extraordinary atlas of the United States featuring 33 weird and wonderful maps with towns that actually exist.

Young readers will love learning all about the ins-and-outs of maps in Crabtrees new series, All Over the Map. Easy to follow instructions, colorful artwork and fun exercises will allow for easy understanding of new materials, drawing readers in. Map drawing, reading, and map types are just some of the stimulating lessons in the All Over the Map series. 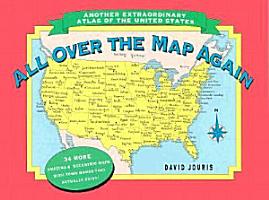 In All Over the Map, readers were introduced to hundreds of bizarre and extraordinary town names that actually exist. Now in All Over the Map Afgain readers are taken to places like Chili Bar, California, Vesuvius, Ohio, and Bland, Missouri. Thirty-three new thematic maps present fun facts and trivia on subjects as diverse as cheese, Shakespeare, gambling, and architecture. Full color throughout.

From country and blues to rap and punk, Texas music is all over the map, figuratively and literally. Texas musicians have pioneered new musical genres, instruments, and playing styles, proving themselves to be daring innovators who often call the tune for musicians around the country and even abroad. To introduce some of these trailblazing Texas musicians to a wider audience and pay tribute to their accomplishments, Michael Corcoran profiles thirty-two of them in All Over the Map: True Heroes of Texas Music. Corcoran covers musicians who work in a wide range of musical genres, including blues, gospel, country, rap, indie rock, pop, Cajun, Tejano, conjunto, funk, honky-tonk, rockabilly, rhythm and blues, and Western swing. His focus is on underappreciated artists, pioneers who haven't fully received their due. He also includes well-known musicians who've been underrated, such as Stevie Ray Vaughan and Selena, and invites us to take a closer look at the unique talents of these artists. Corcoran's profiles come from articles he wrote for the Dallas Morning News, Austin American-Statesman, Houston Press, and other publications, which have been expanded and updated for this volume. His musical detective work even uncovers a case of mistaken identity (Washington Phillips) and corrects much misinformation on Blind Willie Johnson and Arizona Dranes. Corcoran closes the book with lively pieces on the Austin music scene and its most famous, if no longer extant, clubs, as well as his personal lists of the forty greatest Texas songs of all time and the twenty-five essential CDs for Texas music fans.