The New York Times Bestseller From one of the country’s most recognizable journalists: How becoming a grandmother transforms a woman’s life. After four decades as a reporter, Lesley Stahl’s most vivid and transformative experience of her life was not covering the White House, interviewing heads of state, or researching stories at 60 Minutes. It was becoming a grandmother. She was hit with a jolt of joy so intense and unexpected, she wanted to “investigate” it—as though it were a news flash. And so, using her 60 Minutes skills, she explored how grandmothering changes a woman’s life, interviewing friends like Whoopi Goldberg, colleagues like Diane Sawyer (and grandfathers, including Tom Brokaw), as well as the proverbial woman next door. Along with these personal accounts, Stahl speaks with scientists and doctors about physiological changes that occur in women when they have grandchildren; anthropologists about why there are grandmothers, in evolutionary terms; and psychiatrists about the therapeutic effects of grandchildren on both grandmothers and grandfathers. Throughout Becoming Grandma, Stahl shares stories about her own life with granddaughters Jordan and Chloe, about how her relationship with her daughter, Taylor, has changed, and about how being a grandfather has affected her husband, Aaron. In an era when baby boomers are becoming grandparents in droves and when young parents need all the help they can get raising their children, Stahl’s book is a timely and affecting read that redefines a cherished relationship.

Kitzinger, a social anthropologist, explores the experience of grandmotherhood both personally and historically based on detailed research. 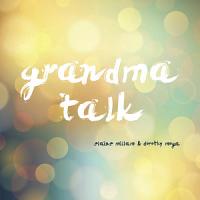 Five women sit around the table in a neighborhood coffee shop. Their cups have bold black, a variety of lattes and a dirty chai. All are grandmothers. Their conversation is about the delights of being a grandma. They are a diverse group. They have come to grandma-hood from different places -- different parts of the world, different ages, different cultures. And they have had different grandma experiences. Some live near or with their grandchildren. Some live far away. Among them, they have young grandchildren and adult grandchildren. Yet they share a common bond: to be the best grandmas they can be and to pass on a little bit of themselves. They share their stories.

Generational nuclei are like those found in atoms: structural dimensions held together by their positive charge which releases a binding energy. Generational nuclei cannot be defined so precisely, but their activity can be observed and tested just like their atomic counterparts. The generational nuclei are identified through ethno-antropological observation and produce an enormous amount of attractive energy towards both their own generation and others, with a power that shapes future values and behaviours.

The period up to the Cold War of the late twentieth century was a time of great social, economic, political, and religious changes. New discoveries in medicine eliminated epidemics and increased life expectancy. Inventions such as the automobile, telephone, radio, television, airplanes and rocketry revolutionized our lives. We experienced major world wars and the disaster of a great depression. Millions of people emigrated to the United States during this time, seeking personal freedom, ownership of property, stable family lives and a chance to prosper It's God's Will describes the life of an Irish immigrant girl who lived for almost one hundred years during this great period of change. Through it all she never swayed from her beliefs in a supreme being, the power of prayer, the closeness of family, and the necessity to serve her country. Her prayers, precepts and goals are still applicable today.

A humorous look at one woman's growth in faith. Through a series of essays, the author leads us through her struggles with spirituality as she confronts the myriad problems facing today's families.

A descendant of Lebanese Catholic immigrants on her father's side and Baptist sharecroppers on her mother's, Teresa Nicholas recounts in Buryin' Daddy a southern upbringing with an unusual inflection. As the book opens, the author recalls her charmed early childhood in the late 1950s, when she and her family live with her grandparents in a graceful old bungalow in Yazoo City, Mississippi. But when the author is five, her eccentric father—secretive, penurious, autocratic, hoarding—moves his growing family into a condemned duplex nearby. Separated from her beloved grandmother and chafing under her father's erratic discipline, the girl longs to flee from the awful decrepit house. When she's a teenager, she and her father find themselves on conflicting sides of the civil rights movement and their arguments grow more painful, until a scholarship to a northeastern college provides the means of her escape. Two decades later, Nicholas has built a successful career in book publishing in New York. When her father dies suddenly, she returns to Mississippi for the funeral and to spend a month in the hated duplex as her mother comes to terms with her husband's passing. But as she sorts through the strange detritus of her father's life, the author comes to understand that he was far more complex than the angry man she thought she knew. And as she draws closer to her surprisingly resilient mother, affected by stroke but full of blunt country talk, she finds that her mother is also far from the naïve, helpless creature she remembers. Through a series of surprising and oddly humorous discoveries, the author and her mother will begin to unravel her father's poignant secrets together in this graceful and generous exploration of the intermingling of shame and love that lie at the heart of family life.