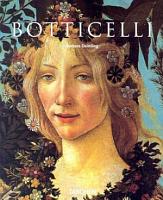 Florence's golden child: The Early Renaissance master During Sandro Botticelli's lifetime (1444/45-1510), the influence of his art scarcely reached beyond his native Florence, and following his death he was soon forgotten, to be rediscovered only in the 19th century by the Pre-Raphaelites. Since then, Botticelli has ranked among the greatest of the Renaissance artists. In the Uffizi Gallery in Florence, paintings such as"Primavera" and "The Birth of Venus" are among the foremost attractions for tourists and art lovers. Botticelli's captivating figures of women, his intimate portrayals of the Madonna and Child, and the angelic beauty of his adolescents are famous the world over today. The artist's life and work are explored in this thoughtful and beautifully illustrated study.About the Series: Each book in TASCHEN's Basic Art Series features: a detailed chronological summary of the life and oeuvre of the artist, covering his or her cultural and historical importance a concise biography approximately 100 colour illustrations with explanatory captions 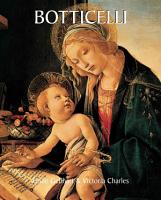 He was the son of a citizen in comfortable circumstances, and had been, in Vasari’s words, “instructed in all such things as children are usually taught before they choose a calling.” However, he refused to give his attention to reading, writing and accounts, continues Vasari, so that his father, despairing of his ever becoming a scholar, apprenticed him to the goldsmith Botticello: whence came the name by which the world remembers him. However, Sandro, a stubborn-featured youth with large, quietly searching eyes and a shock of yellow hair – he has left a portrait of himself on the right-hand side of his picture of the Adoration of the Magi – would also become a painter, and to that end was placed with the Carmelite monk Fra Filippo Lippi. But he was a realist, as the artists of his day had become, satisfied with the joy and skill of painting, and with the study of the beauty and character of the human subject instead of religious themes. Botticelli made rapid progress, loved his master, and later on extended his love to his master’s son, Filippino Lippi, and taught him to paint, but the master’s realism scarcely touched Lippi, for Botticelli was a dreamer and a poet. Botticelli is a painter not of facts, but of ideas, and his pictures are not so much a representation of certain objects as a pattern of forms. Nor is his colouring rich and lifelike; it is subordinated to form, and often rather a tinting than actual colour. In fact, he was interested in the abstract possibilities of his art rather than in the concrete. For example, his compositions, as has just been said, are a pattern of forms; his figures do not actually occupy well-defined places in a well-defined area of space; they do not attract us by their suggestion of bulk, but as shapes of form, suggesting rather a flat pattern of decoration. Accordingly, the lines which enclose the figures are chosen with the primary intention of being decorative. It has been said that Botticelli, “though one of the worst anatomists, was one of the greatest draughtsmen of the Renaissance.” As an example of false anatomy we may notice the impossible way in which the Madonna’s head is attached to the neck, and other instances of faulty articulation and incorrect form of limbs may be found in Botticelli’s pictures. Yet he is recognised as one of the greatest draughtsmen: he gave to ‘line’ not only intrinsic beauty, but also significance. In mathematical language, he resolved the movement of the figure into its factors, its simplest forms of expression, and then combined these various forms into a pattern which, by its rhythmical and harmonious lines, produces an effect upon our imagination, corresponding to the sentiments of grave and tender poetry that filled the artist himself. This power of making every line count in both significance and beauty distinguishes the great master- draughtsmen from the vast majority of artists who used line mainly as a necessary means of representing concrete objects. 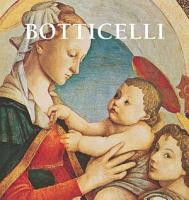