The years between 1744 and 1757 were a testing time for the British government as political unrest at home exploded into armed rebellion, whilst on the continent French armies were repeatedly victorious. Providing an analytical narrative, supported by thematic chapters, this book examines the relationship between Britain’s politics and foreign policy in a period not hitherto treated as a unit. Building upon methods employed in the preceding two books (’Politics and Foreign Policy in the Age of George I, 1714-1727’ and ’Politics and Foreign Policy, 1727-44’), this volume charts the significant political changes of 1744-57. It shows how ministerial change and political fortunes were closely linked to foreign policy, with foreign policy affecting, and being affected by, political developments. In particular, it asks important questions about the politics and foreign policy of these years and thus reconsiders the context of imperial growth, economic development and political stability. Far from being simply a study of individual episodes, the book outlines the structural aspects of the relationship between foreign policy and politics, examining issues of political stability, motivation and effectiveness. In particular, the role of monarch, Court and ministers are considered alongside those of Parliament, parliamentary politics, and the public sphere of discussion, notably, but not only, the press. The book therefore offers a guided narrative that both uses and builds on the analysis offered by contemporary commentators, and provides an informed assessment of the significance of the ideas, terms and language employed in eighteenth-century Britain to discuss foreign policy and politics.

Following on from Professor Blackâe(tm)s previous volumes, this book continues his exploration of British politics and foreign policy between the Hanoverian accession in 1714 and the end of the War of American Independence in 1783. This fourth book in the sequence, covering the period 1758-70, consciously avoids treating the end of the Seven Yearsâe(tm) War in 1763 as a stopping point, and instead continues its investigation into the post-war situation. This provides the reader with a valuable study in continuities before and after the war, as well as highlighting how the period was essentially one of success for Britain - one in which she won a major war with France, defeated Spain, constructed a major empire, and played a key role in the post-war Atlantic world. It thus contrasts with the previous years of crisis covered in the 1744-57 volume, and the repeated failures in the 1770s to confront Russian expansionism, and to reverse tendencies towards isolation in the face of foreign intervention in the War of American Independence. In so doing the book examines the processes of a largely successful foreign policy and politics, both in the more immediate senses of diplomacy and ministerial, parliamentary and public politics, and with reference to broader questions of the links between Britainâe(tm)s international position and the nature of Britain as nation and state. An integral part of professor Blackâe(tm)s ongoing analysis of British policy between 1714 and 1783, the book offers a major reassessment of the period, one that provides an informed guide to the parameters established by domestic political circumstances.

Bringing strategy, foreign policy, domestic and imperial politics together, this book challenges the conventional understanding as to why the British Empire, at perhaps the height of its power, lost control of its American colonies. Critiquing the traditional emphasis on the value of alliance during the Seven Years' War, and the consequences of British isolation during the War of American Independence, Jeremy Black shows that this rests on a misleading understanding of the relationship between policy and strategy. Encompassing both the Seven Years' War and the American War of Independence and grounded in archival research, this book considers a violent and contentious period which was crucial to the making of modern Britain and its role in the wider world. Offering a reinterpretation of British strategy and foreign policy throughout this time, To Lose an Empire interweaves British domestic policy with diplomatic and colonial developments to show the impact this period and its events had on British strategy and foreign policy for years to come.

Military strategy takes place as much on broad national and international stages as on battlefields. In a brilliant reimagining of the impetus and scope of eighteenth-century warfare, historian Jeremy Black takes us far and wide, from the battlefields and global maneuvers in North America and Europe to the military machinations and plotting of such Asian powers as China, Japan, Burma, Vietnam, and Siam. Europeans coined the term "strategy" only two centuries ago, but strategy as a concept has been practiced globally throughout history. Taking issue with traditional military historians, Black argues persuasively that strategy was as much political as battlefield tactics and that plotting power did not always involve outright warfare but also global considerations of alliance building, trade agreements, and intimidation.

This volume challenges the traditional view that the First World War represents a pivotal turning point in the long history of monarchy, suggesting the picture is significantly more complex. Using a comparative approach, it explores the diverse roles played by monarchs during the Great War, and how these met the expectations of the monarchic institution in different states at a time of such crisis. Its contributors not only explore less familiar narratives, including the experiences of monarchs in Belgium and Italy, as well as the Austro-Hungarian, Japanese and Ottoman Empires, but also cast fresh light on more familiar accounts. In doing so, this book moves away from the conventional view that monarchy showed itself irrelevant in the Great War, by drawing on new approaches to diplomatic and international history - ones informed by cultural contextualization for instance - while grounding the research behind each chapter in a wide range of contemporary sources The chapters provide an innovative revisiting of the actual role of monarchy at this crucial period in European (indeed, global) history, and are framed by a substantial introductory chapter where the key factors explaining the survival or collapse of dynasties, and of the individuals occupying these thrones, are considered in a wide-ranging set of reflections that highlight the extent of common experiences as well as the differences.

Covering the period from the end of the Anglo-French alliance in 1731 to the declaration of war between the two powers in 1744, this book charts a turbulent period in British politics that witnessed the last decade of the Walpole ministry, the attempt to replace it by a Patriot government, and the return of the Old Corps Whigs to a process of dominance. In particular it reveals how ministerial change and political fortunes were closely linked to foreign policy, with foreign policy both affecting, and being affected by, political developments. The book draws upon a great range of foreign and domestic sources, but makes particular use of foreign diplomatic records. These are important as many negotiations were handled, at least in part, through envoys in London. Moreover, these diplomats regularly spoke with George II and his ministers, and some were personal friends of envoys and could be used for secret negotiations outside normal channels. The range of sources consulted ensures that the book offers more than any previous book to cover the period as a whole, whilst not simply becoming a detailed study of a number of episodes. Instead it retains the strong structural aspects of the relationship between foreign policy and politics necessary to examine questions about political stability, motivation and effectiveness. Following on from Jeremy Black’s previous studies on eighteenth-century foreign policy, ’Politics and Foreign Policy under George I’ (covering the period 1714-27) this new book takes the story up to 1744 and continues to illuminate the complex and often opaque workings of the British state at a turbulent period of European history. 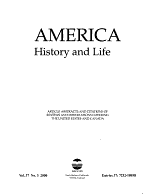 Provides historical coverage of the United States and Canada from prehistory to the present. Includes information abstracted from over 2,000 journals published worldwide.

It was during the course of the eighteenth century that Britain's status as a major maritime and commercial power was forged, shaping the political, economic and military policies of the nation for the next two centuries. Starting from a relatively minor role in global affairs before 1700, Britain rapidly rose to become a significant player in European affairs, and leading imperial power by 1800. In this commanding contribution to the subject, Jeremy Black draws on his extensive expertise to examine how British political culture and public debate in this period responded to, and in part shaped, this transition to an increasingly prominent role in world affairs. Rather than offering a familiar narrative of Britain's eighteenth-century foreign policy, this book instead focuses upon how this policy was debated and written about in British society. Taking as a central theme the debate over policy and the development of public culture and politics, the study explores how these were linked to developing relations with Europe and helped shape colonial strategies and expectations. It highlights how widely shared concerns about such issues as national defence, the strength of the Royal Navy and trade protection, presented little consensus in how they were to be realised and were the subject of fierce public debate. The book underlines how these kinds of issues were not considered in the abstract, but in terms of a political community that was divided over a series of key issues. By probing the problems and issues surrounding the need to define and discuss Britain's foreign policy in semi-public and public contexts, this book offers a fascinating insight into questions of perceived national interest, and how this developed and evolved over the course of the eighteenth century. This work complements the author's other studies by joining the institutional focus seen there to a wider assessment of public politics and print culture, and as such will make a central contribution to studies of eighteenth-century Britain and Europe.