Ever since 1759, when Voltaire wrote "Candide" in ridicule of the notion that this is the best of all possible worlds, this world has been a gayer place for readers. Voltaire wrote it in three days, and five or six generations have found that its laughter does not grow old. "Candide" has not aged. Yet how different the book would have looked if Voltaire had written it a hundred and fifty years later than 1759. It would have been, among other things, a book of sights and sounds. A modern writer would have tried to catch and fix in words some of those Atlantic changes which broke the Atlantic monotony of that voyage from Cadiz to Buenos Ayres. When Martin and Candide were sailing the length of the Mediterranean we should have had a contrast between naked scarped Balearic cliffs and headlands of Calabria in their mists. We should have had quarter distances, far horizons, the altering silhouettes of an Ionian island. Colored birds would have filled Paraguay with their silver or acid cries. Dr. Pangloss, to prove the existence of design in the universe, says that noses were made to carry spectacles, and so we have spectacles. A modern satirist would not try to paint with Voltaire's quick brush the doctrine that he wanted to expose. And he would choose a more complicated doctrine than Dr. Pangloss's optimism, would study it more closely, feel his destructive way about it with a more learned and caressing malice. His attack, stealthier, more flexible and more patient than Voltaire's, would call upon us, especially when his learning got a little out of control, to be more than patient. Now and then he would bore us. "Candide" never bored anybody except William Wordsworth. Voltaire's men and women point his case against optimism by starting high and falling low. A modern could not go about it after this fashion. He would not plunge his people into an unfamiliar misery. He would just keep them in the misery they were born to.

Candide by Voltaire from Coterie Classics All Coterie Classics have been formatted for ereaders and devices and include a bonus link to the free audio book. “Do you believe,' said Candide, 'that men have always massacred each other as they do to-day, that they have always been liars, cheats, traitors, ingrates, brigands, idiots, thieves, scoundrels, gluttons, drunkards, misers, envious, ambitious, bloody-minded, calumniators, debauchees, fanatics, hypocrites, and fools?' Do you believe,' said Martin, 'that hawks have always eaten pigeons when they have found them?” ― Voltaire, Candide Candide is a young man who is raised in wealth to be an optimist but when he is forced to make his own way in the world, his assumptions and outlook are challenged.

Voltaire’s masterpiece of satire Candide was written between July and December 1758 and published simultaneously in Geneva, Paris and Amsterdam in January 1759. The events in the book unlike most works of fiction are astutely based on the current state of Voltaire’s contemporary world and culled from the headlines of his day. No major power center was omitted. Arbiters of social status, sex/love, money, war and religion were all lambasted within the pages of Candide.

Presents the story of Candide, a naive youth who is conscripted, shipwrecked, robbed, and tortured without losing his optimism and will to live.

Every lover of classic literature should read Candide, the satirical masterpiece that shocked Paris upon its publication in 1759. The novel challenges many of the core assertions of Enlightenment philosophy and calls into question vast swaths of Christian dogma. Though widely banned after its publication, it propelled Voltaire to literary stardom and remains one of the most popular French novels ever written.

Candide by Voltaire. Candide, ou l'Optimisme, is a French satire first published in 1759 by Voltaire, a philosopher of the Age of Enlightenment. The novella has been widely translated, with English versions titled Candide: or, All for the Best (1759); Candide: or, The Optimist (1762); and Candide: Optimism (1947). Ever since 1759, when Voltaire wrote "Candide" in ridicule of the notion that this is the best of all possible worlds, this world has been a gayer place for readers. Voltaire wrote it in three days, and five or six generations have found that its laughter does not grow old. "Candide" has not aged. Yet how different the book would have looked if Voltaire had written it a hundred and fifty years later than 1759. It would have been, among other things, a book of sights and sounds. A modern writer would have tried to catch and fix in words some of those Atlantic changes which broke the Atlantic monotony of that voyage from Cadiz to Buenos Ayres. When Martin and Candide were sailing the length of the Mediterranean we should have had a contrast between naked scarped Balearic cliffs and headlands of Calabria in their mists. We should have had quarter distances, far horizons, the altering silhouettes of an Ionian island. Colored birds would have filled Paraguay with their silver or acid cries. 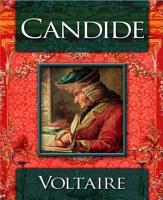 Candide is a French satire by Voltaire, a philosopher of the Age of Enlightenment. It begins with a young man, Candide, who is living a sheltered life in an Edenic paradise and being indoctrinated with Leibnizian optimism (or simply Optimism) by his mentor, Pangloss. The work describes the abrupt cessation of this lifestyle, followed by Candide's slow, painful disillusionment as he witnesses and experiences great hardships in the world. Voltaire concludes with Candide, if not rejecting optimism outright, advocating a deeply practical precept, "we must cultivate our garden", in lieu of the Leibnizian mantra of Pangloss, "all is for the best in the best of all possible worlds". Candide is characterized by its sarcastic tone, as well as by its erratic, fantastical and fast-moving plot. A picaresque novel it parodies many adventure and romance clichés, the struggles of which are caricatured in a tone that is mordantly matter-of-fact. Still, the events discussed are often based on historical happenings, such as the Seven Years' War and the 1755 Lisbon earthquake. As philosophers of Voltaire's day contended with the problem of evil, so too does Candide in this short novel, albeit more directly and humorously. Voltaire ridicules religion, theologians, governments, armies, philosophies, and philosophers through allegory; most conspicuously, he assaults Leibniz and his optimism. As expected by Voltaire, Candide has enjoyed both great success and great scandal. Immediately after its secretive publication, the book was widely banned because it contained religious blasphemy, political sedition and intellectual hostility hidden under a thin veil of naïveté. However, with its sharp wit and insightful portrayal of the human condition, the novel has since inspired many later authors and artists to mimic and adapt it. Today, Candide is recognized as Voltaire's magnum opus and is often listed as part of the Western canon; it is arguably taught more than any other work of French literature. It was listed as one of The 100 Most Influential Books Ever Written.

Candide, or the Optimist is Voltaire’s hilarious and deeply scathing satire on the Age of Enlightenment. This classic of French literature has been a bestseller for over two hundred years. Part of the Macmillan Collector’s Library, a series of stunning, clothbound, pocket-sized classics with gold-foiled edges and ribbon markers. These beautiful books make perfect gifts or a treat for any book lover. This classic of French literature features an introduction by Dr Marine Ganofsky. Young nobleman Candide lives a sheltered and comfortable life under the tutorship of the ridiculous Dr Pangloss who espouses the prevailing 18th-century philosophy of Optimism. Following an indiscretion, Candide is cast out into the world which according to Pangloss is ‘the best of all possible worlds’. But this is not so, Candide and his companions encounter nothing but ludicrous calamities in their madcap travels around the world – war crimes, earthquakes, inquisitions and chain gangs – all based with horrible closeness on real events of the 18th century.

This lively new translation of Voltaire's satiric masterpiece is accompanied by a short selection of writings of each of the most prominent optimists to whom Voltaire was responding -- Leibniz, Bolingbroke, Shaftesbury, Pope, Wolff, Rousseau, and Malebranche -- and thus offers a better perspective of the intellectual context in which Candide was written, and of its place in Enlightenment though, than does any other edition.

Candide has been delighting readers since 1759 with its satiric wit, provocations, and warnings.

When you want to read in both French and English, though, there

"The story of Candide, a naive youth who is conscripted, shipwrecked, robbed, and tortured by the Inquisition without losing his will to live, is accompanied by four other stories"--NoveList. 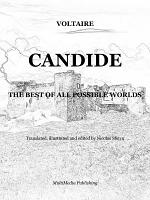 Translated and illustrated by Nicolae Sfetcu. A philosophical tale, a story of a journey that will transform the eponymous hero into a philosopher. An important debate on fatalism and the existence of Evil. For a long time Voltaire has been fiercely opposed to the ideas of the philosopher Leibniz concerning God, the "principle of sufficient reason," and his idea of ​​"pre-established harmony." God is perfect, the world can not be, but God has created the best possible world. Evil exists punctually, but it is compensated elsewhere by an infinitely great good. Nothing happens without there being a necessary cause. An encouragement to fatalism. Voltaire opposes to this optimism that he considers smug, a lucid vision on the world and its imperfections, a confidence in the man who is able to improve his condition. In Candide, Voltaire openly attacks Leibnizian optimism and makes Pangloss a ridiculous defender of this philosophy. Criticism of optimism is the main theme of the tale: each of the adventures of the hero tends to prove that it is wrong to believe that our world is the best of all possible worlds.

Political satire doesn't age well, but occasionally a diatribe contains enough art and universal mirth to survive long after its timeliness has passed. Candide is such a book. Penned by that Renaissance man of the Enlightenment, Voltaire, Candide is steeped in the political and philosophical controversies of the 1750s. But for the general reader, the novel's driving principle is clear enough: the idea (endemic in Voltaire's day) that we live in the best of all possible worlds, and apparent folly, misery and strife are actually harbingers of a greater good we cannot perceive, is hogwash. Telling the tale of the good-natured but star-crossed Candide (think Mr. Magoo armed with deadly force), as he travels the world struggling to be reunited with his love, Lady Cunegonde, the novel smashes such ill-conceived optimism to splinters. Candide's tutor, Dr. Pangloss, is steadfast in his philosophical good cheer, in the face of more and more fantastic misfortune; Candide's other companions always supply good sense in the nick of time. Still, as he demolishes optimism, Voltaire pays tribute to human resilience, and in doing so gives the book a pleasant indomitability common to farce. Says one character, a princess turned one-buttocked hag by unkind Fate: "I have wanted to kill myself a hundred times, but somehow I am still in love with life. This ridiculous weakness is perhaps one of our most melancholy propensities; for is there anything more stupid than to be eager to go on carrying a burden which one would gladly throw away, to loathe one's very being and yet to hold it fast, to fondle the snake that devours us until it has eaten our hearts away?" - Michael Gerber

A classic, satiric novel, by the noted 18th century French author and philosopher chronicles the misadventures of the naive Candide, who continues to manifest her belief that "all is for the best" despite the injustice, despair, and suffering she encount