When a hostile Third World country begins to receive military training and nuclear technology from foreign nations, Charley Castillo and his team investigate only to be abandoned by the U.S. government and placed on hit lists throughout the world. By the best-selling authors of The Outlaws.

Charley Castillo and the former members of Presidential Agent’s Office of Organizational Analysis are officially “retired.” But that doesn’t mean they’re out of action… At a Mexican roadblock, a US Embassy SUV is stopped at gunpoint, three of its passengers murdered, and a fourth kidnapped. Everything points to the drug cartels, especially when the kidnappers say they will return the hostage if a cartel kingpin is released from US federal prison. But when word gets to Castillo and his group of retired spies and special operators, they have their doubts. They believe that it's a diversion—that the murders and kidnapping were ordered by someone to lure Castillo & Company to their deaths. But even knowing that may not save them. Powerful forces in the US government are arrayed against them as well, and if one side doesn't get them...the other side will. 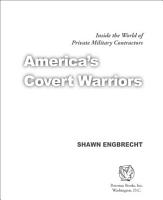 A cogent analysis of the failings and potential of private military contractors.

From the start of the Cold War to the fall of Saigon, from the Congo to Tibet, from the Bay of Pigs to North Vietnam and Nicaragua, here is a comprehensive overview of U.S. air-supported covert operations against the Soviet bloc. Twilight Warriors brings a sense of continuity to the shifting, shadowy battlefronts of the Cold War, spanning the postwar decades with one fascinating account after another. The known and not-so well known are woven together to provide the big picture: failed early attempts to set up spy cells behind the Iron Curtain (confounded by the agent Kim Philby), the actual CIA plane that secretly appeared in the James Bond film "Thunderball," Operation Mongoose, clandestine "airlines," and the gutsy breed who took to the skies as airborne spies. This is a sweeping, globe-trotting account of covert ops in the post-war era that reads like an epic secret history.

The capital of the U.S. Empire after World War II was not a city. It was an American suburb. In this innovative and timely history, Andrew Friedman chronicles how the CIA and other national security institutions created a U.S. imperial home front in the suburbs of Northern Virginia. In this covert capital, the suburban landscape provided a cover for the workings of U.S. imperial power, which shaped domestic suburban life. The Pentagon and the CIA built two of the largest office buildings in the country there during and after the war that anchored a new imperial culture and social world. As the U.S. expanded its power abroad by developing roads, embassies, and villages, its subjects also arrived in the covert capital as real estate agents, homeowners, builders, and landscapers who constructed spaces and living monuments that both nurtured and critiqued postwar U.S. foreign policy. Tracing the relationships among American agents and the migrants from Vietnam, El Salvador, Iran, and elsewhere who settled in the southwestern suburbs of D.C., Friedman tells the story of a place that recasts ideas about U.S. immigration, citizenship, nationalism, global interconnection, and ethical responsibility from the post-WW2 period to the present. Opening a new window onto the intertwined history of the American suburbs and U.S. foreign policy, Covert Capital will also give readers a broad interdisciplinary and often surprising understanding of how U.S. domestic and global histories intersect in many contexts and at many scales. American Crossroads, 37

Presents students with an anthology of published articles from diverse sources as well as contributions to the study of intelligence. This collection includes perspectives from the history of warfare, views on the evolution of US intelligence, and studies on the balance between the need for information-gathering and the values of a democracy.

Traces our country's long history of covert and special operations, focusing on the similarities and differences in the practice from the Revolutionary War to the present. • References literature supporting both sides of the special and covert operations debate • Explains how covert operations is used as a tool of American foreign policy • Examines the changes in covert operations since the attacks of September 11, 2001

The Central Intelligence Agency is essential in the fight to keep America safe from foreign attacks. This two-volume work traces through facts and documents the history of the CIA, from the people involved to the operations conducted for national security. • Covers the history of the CIA from its days prior to World War II, when it was known as the Office of Strategic Services (OSS), supplying comprehensive, objective information in a convenient ready reference • Provides documents formerly classified as "top secret" and an extensive bibliography to allow further research by students • Includes contributions from about two dozen experts in their field of study, ranging from a psychologist describing CIA "mind experiments" to former practitioners and historians writing on covert operations during the Cold War • Provides primary documents such as the oldest formerly classified document held by the CIA (how to make invisible ink, 1918) and intelligence reports that Osama bin Laden was planning to attack the United States (2001)

Freedom fighters. Guerrilla warriors. Soldiers of fortune. The many civil wars and rebellions against communist governments drew heavily from this cast of characters. Yet from Nicaragua to Afghanistan, Vietnam to Angola, Cuba to the Congo, the connections between these anticommunist groups have remained hazy and their coordination obscure. Yet as Kyle Burke reveals, these conflicts were the product of a rising movement that sought paramilitary action against communism worldwide. Tacking between the United States and many other countries, Burke offers an international history not only of the paramilitaries who started and waged small wars in the second half of the twentieth century but of conservatism in the Cold War era. From the start of the Cold War, Burke shows, leading U.S. conservatives and their allies abroad dreamed of an international anticommunist revolution. They pinned their hopes to armed men, freedom fighters who could unravel communist states from within. And so they fashioned a global network of activists and state officials, guerrillas and mercenaries, ex-spies and ex-soldiers to sponsor paramilitary campaigns in Asia, Africa, and Latin America. Blurring the line between state-sanctioned and vigilante violence, this armed crusade helped radicalize right-wing groups in the United States while also generating new forms of privatized warfare abroad. 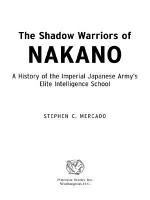 In the history of the twentieth century, the role of the military intelligence services in the competition among nations is still murky. Among the world's foremost intelligence services, those of Imperial Japan remain the least known. Few stories are as compelling as those surrounding the Japanese Army's Nakano School. From 1938 to 1945, the Nakano School trained more than 2,000 men in intelligence gathering, propaganda, and irregular warfare. Working in the shadows, these dedicated warriors executed a range of missions, from gathering intelligence in Latin America to leading commando raids against American lines in Papua New Guinea, in the Philippines, and on Okinawa. They played major roles in operations to subvert British rule in India, and they organized Japanese civilians into guerrilla units that would have made the invasion of Japan a bloodbath. One graduate used his Nakano commando training to elude U.S. and Philippine military patrols until emerging from the jungle nearly thirty years after the war's end. In the decades after World War II, graduates of the school worked to obtain from the United States and Russia the release of imprisoned war criminals and the recovery of lost territory, including Okinawa. Based on archival research and the memoirs of Japanese veterans, The Shadow Warriors of Nakano shines a much-needed light into the shadows of World War II and postwar Japanese affairs.

The early 21st century is a complex time presenting unique challenges for men. This book examines many of those challenges, from dysfunctional relationships and confusion about what it means to be ‘male’ in the postmodern world, to understanding the dark side of the masculine psyche, as well as how to apply the best qualities of ‘warrior consciousness’ to experience overall success and fulfilment in life. 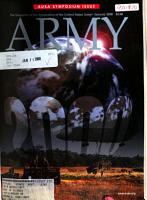 The Vietnam War lasted twenty years, and was the USA's greatest military failure. An attempt to stem the spread of Soviet and Chinese influence, the conflict in practice created a chaotic state torn apart by espionage, terrorism and guerilla warfare. American troops quickly became embroiled in jungle warfare and knowledge of the other side's troop movements, communication lines, fighting techniques and strategy became crucial. Panagiotis Dimitrakis uncovers this battle for intelligence and tells the story of the Vietnam War through the newly available British, American and French sources - including declassified material. In doing so he dissects the limitations of the CIA, the NSA, the MI6 and the French intelligence- the SDECE- in gathering actionable intelligence. Dimitrakis also shows how the Vietminh under Ho Chi Minh established their own secret services; how their high grade moles infiltrated the US and French military echelons and the government of South Vietnam, and how Hanoi's intelligence apparatus eventually suffered seriously from 'spies amongst us' paranoia. In doing so he enhances our understanding of the war that came to define its era.

While the United States has had some kind of intelligence capability throughout its history, its intelligence apparatus is young, dating only to the period immediately after World War II. Yet, in that short a time, it has undergone enormous changes—from the labor-intensive espionage and covert action establishment of the 1950s to a modern enterprise that relies heavily on electronic data, technology, satellites, airborne collection platforms, and unmanned aerial vehicles, to name a few. This second edition covers the history of United States intelligence, and includes several key features: Chronology Introductory essay Appendixes Bibliography Over 600 cross-referenced entries on key events, issues, people, operations, laws, regulations This book is an excellent access point for members of the intelligence community; students, scholars, and historians; legal experts; and general readers wanting to know more about the history of U.S. intelligence.