Most studies on reading have been conducted with English-speaking subjects. It is crucial to also examine studies conducted in different languages, in order to highlight which aspects of reading acquisition and dyslexia appear to be language-specific, and which are universal. Reading Acquisition and Developmental Dyslexia sheds new light on dyslexia and its relationship with reading acquisition, presenting two unique advancements in this area. Looking at studies conducted in different languages, the prerequisites of reading acquisition are examined, and the findings from studies of skilled adult readers are presented. The manifestations of developmental dyslexia and the main contemporary explanations for it are outlined, providing an in-depth, well researched discussion of the topic. The authors conclude by offering a new framework which could explain both reading acquisition and developmental dyslexia. A fascinating book offering a unique insight into the topic of dyslexia, it will be of great interest to students and lecturers in cognitive psychology, educational psychology, and psycholinguistics, as well as those with a more everyday involvement with the disorder such as speech and language therapists.

The first truly systematic, multi-disciplinary, and cross-linguistic study of the language and writing system factors affecting the emergence of dyslexia. 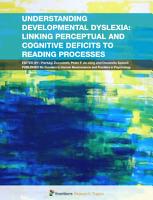 Understanding the mechanisms responsible for developmental dyslexia (DD) is a key challenge for researchers. A large literature, mostly concerned with learning to read in opaque orthographies, emphasizes phono-logical interpretations of the disturbance. Other approaches focused on the visual-per-ceptual aspects of orthographic coding. Recently, this perspective was supported by imaging data showing that individuals with DD have hypo-activation in occipito-temporal areas (a finding common to both transpar-ent and opaque orthographies). Nevertheless, it is difficult to infer causal relationships from activation data. Accommodating these findings within the cognitive architecture of reading processes is still an open issue. This is a general problem, which is present in much of the literature. For example, several studies investigating the perceptual and cognitive abilities that distinguish groups of children with and without DD failed to provide explicit links with the reading process. Thus, several areas of investigation (e.g., acoustic deficits or magnocellular deficiencies) have been plagued by replication failures. Furthermore, much research has neglected the possible contribution of comorbid symptoms. By contrast, it is now well established that developmental disorders present a large spectrum of homotopic and heterotopic co-morbidities that make causal interpretations problematic. This has led to the idea that the etiology of learning difficulties is multifactorial, thus challenging the traditional models of DD. Recent genetic studies provide information on the multiple risk factors that contribute to the genesis of the disturbance. Another critical issue in DD is that much of the research has been conducted in English-speaking individuals. However, English is a highly irregular orthography and doubts have been raised on the appropriateness of automatically extending interpretations based on English to other more regular orthographies. By contrast, important information can be gotten from systematic comparisons across languages. Thus, the distinction between regular and irregular orthographies is another potentially fruitful area of investigation. Overall, in spite of much research current interpretations seem unable to integrate all available findings. Some proposals focus on the cognitive description of the reading profile and explicitly ignore the distal causes of the disturbance. Others propose visual, acoustic or phonological mech-anisms but fail to link them to the pattern of reading impairment present in different children. The present Research Topic brings together studies based on different methodological approaches (i.e., behavioural studies examining cognitive and psycholinguistic factors, eye movement inves-tigations, biological markers, neuroimaging and genetic studies), involving dyslexic groups with and without comorbid symptoms, and in different orthographies (transparent and opaque) to identify the mechanisms underlying DD. The RT does not focus on a single model or theory of dyslexia but rather brings together different approaches and ideas which we feel are fruitful for a deeper understanding developmental dyslexia. 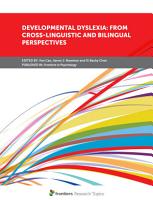 Developmental Dyslexia from Birth to Eight takes a fresh approach to a condition which is often poorly understood and unjustly stigmatised. Illuminating the latest neurological advances in the field, this book will empower educational professionals to play a decisive role in supporting and encouraging children with dyslexia. With an overarching focus on the ways in which practitioners can advance children’s development and learning, Developmental Dyslexia from Birth to Eight recognises the varying guises in which this information-processing difference might present, and addresses the challenges that this creates for children and practitioners alike. Each chapter provides the reader with a thorough examination and explanation of dyslexia, along with reflective examples, case studies and relevant further reading. Areas of focus include: The origins and identification of dyslexia Intervention strategies and alternative therapies Observation and assessment Dyslexia and English as a foreign language Dyslexia-friendly settings National and global policy on provision for dyslexic children An engaging and accessible guide, this book will be an invaluable resource for educational practitioners and childcare specialists seeking to enhance their knowledge and understanding of dyslexia, to better support the children in their care. 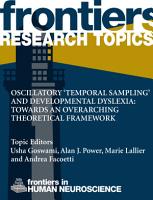 Children with developmental dyslexia fail to acquire efficient reading and spelling skills despite adequate tuition and an absence of overt sensory and/ or neural deficits. Learning to read and spell requires linguistic skills, auditory skills and visual skills. Oscillatory 'temporal sampling' theory links the development of sensory and linguistic processes. The auditory system 'samples' acoustic information at different temporal rates, which for speech processing suggests that temporal information encoded by delta, theta and gamma oscillations is bound together in the final speech percept. Temporal sampling theory proposed a possible deficit in dyslexia in auditory sampling of the speech signal at syllable-relevant rates (< 10 Hz, delta and theta). This would hypothetically affect prosodic development prior to reading and syllable-based parsing, which would affect efficient linguistic skills and consequently reading development across languages. The visual system also samples information in the visuo-spatial field. In theory atypical visual oscillatory sampling could therefore be related to some of the visual features of developmental dyslexia. In this special issue, we bring together visual and auditory sensory processing studies around the general theme of oscillatory temporal sampling. Contributors were encouraged to discuss their findings within a temporal sampling perspective. The resulting studies cover a wide range of sensory processes, with findings both supporting and contradicting the theory. It is also important to note that studies covered a wide range of languages, and that the behavioural manifestations of a sampling impairment may differ both with language and over the course of development. Nevertheless, it is encouraging to see such diverse findings considered within a single theoretical framework, even if at the same time, it is apparent that an over-arching theoretical framework encompassing both visual and auditory deficits in dyslexia is yet to be achieved.

This book presents the results of three experimental studies focusing on the ability of people with dyslexia to resolve ambiguous anaphoric sentences where concrete and abstract referents are present. Each study represents a step in the ongoing investigation of this issue, and stems from questions left unanswered by previous research. This work is primarily inspired by the desire to gain a better understanding of the role of syntactic and lexical knowledge in text comprehension, and, more specifically, of the effects of word concreteness and abstractness in anaphora resolution contexts for readers with dyslexia. The book also investigates the resources necessary to process ambiguous anaphoric sentences. The innovative methodology implemented here comprises both experimental techniques (such as eye-tracking) and the use of questionnaires and standardised tests to answer specific research questions. It also puts forward a hypothesis that explains the different deficits manifesting in people with dyslexia, and suggests that, in reading comprehension tasks, the known impairment in people with dyslexia’s working memory may hinder their ability to efficiently and accurately perform tasks involving procedural memory resources. As a consequence, this impairment would emerge as disruptions of people with dyslexia’s semantic and syntactic competence, as well as their functioning in complex tasks which are particularly demanding in terms of working memory resources. 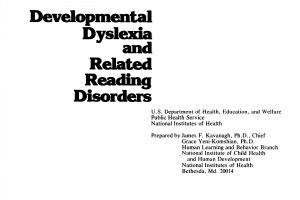 This volume on neuropsychological and neurolinguistic perspectives of dyslexia and alexia is based on the papers presented at the NATO Advanced Study Institute held towards the end of 1991. The book, consisting of sixteen chapters from cognitive neuropsychologists and neurolinguists from different countries, is divided into three parts addressing the following issues: Part I: Neuropsychological substrates; Part II: Case studies, and Part III: Computational and linguistic approaches. The contributors are from England and Wales, different parts of Europe, Scandinavia, North America and Russia. This volume and the companion volume Reading Disabilities: Diagnosis and Component Processes (Kluwer, 1993) are helpful to researchers in the fields of literacy and cognitive neuropsychology. It is intended for researchers, clinicians, university professors, senior or post-graduate students in psychology, psycholinguistics, cognitive neuropsychology, educational psychology, and special education.

From a May 1992 conference (no location mentioned), 11 papers discuss the neural, genetic, visual cognitive, and auditory mechanisms relating to the study of reading and language. They also describe two methods for functional neural imaging: identifying two pathways used for verbal response selection, and the neuromagnetic assessment of human cortical function. Annotation copyright by Book News, Inc., Portland, OR