For many centuries Jews and Germans were economically and culturally of significant importance in Eastern Europe. Both groups had a similar background of origin and spoke related languages: German and Yiddish. This volume aims to explore the entanglements and interdependences of Jews and Germans in Eastern Europe from the late middle ages to the 20th century. Moreover, the perception of Jews as Germans in this region is discussed in detail.

This work has been selected by scholars as being culturally important and is part of the knowledge base of civilization as we know it. This work is in the public domain in the United States of America, and possibly other nations. Within the United States, you may freely copy and distribute this work, as no entity (individual or corporate) has a copyright on the body of the work. Scholars believe, and we concur, that this work is important enough to be preserved, reproduced, and made generally available to the public. To ensure a quality reading experience, this work has been proofread and republished using a format that seamlessly blends the original graphical elements with text in an easy-to-read typeface. We appreciate your support of the preservation process, and thank you for being an important part of keeping this knowledge alive and relevant. 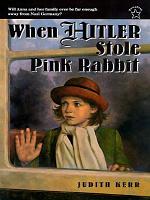 Anna is not sure who Hitler is, but she sees his face on posters all over Berlin. Then one morning, Anna and her brother awake to find her father gone! Her mother explains that their father has had to leave and soon they will secretly join him. Anna just doesn?t understand. Why do their parents keep insisting that Germany is no longer safe for Jews like them? Because of Hitler, Anna must leave everything behind. Based on the gripping real-life story of the author, this poignant backlist staple gets a brandnew look for a new generation of readers just in time for Holocaust Remembrance Month.

First Published in 2017. Routledge is an imprint of Taylor & Francis, an Informa company.

This volume is a comprehensive but accessible guide to the major questions raised by the Hellenistic Jewish work, Joseph and Aseneth. Joseph and Aseneth is an excellent example of the controverted issues of text, dating and Sitz im Leben, when such decisions must be largely based on internal evidence. It provides an entre into the vexed question of genre, given the numerous literary links that have been suggested for it. Its mysterious but engaging plot, and its female protagonist, evoke ongoing sociological and feminist debate. It is thus strongly commended for careful study to students and scholars of Judaism, New Testament, sociology and narratology. Intended as a sound basis for such exploration, this guide also offers a fresh narrative reading in which the revelatory character of Joseph and Aseneth is brought to the forefront.

Memories of catastrophes--both those which occur naturally and those which are consequences of human actions--loom large in the modern consciousness. The volume opens with an investigation of the concepts of catastrophe and collective memory, and the relationships between them. Arguing that a pervasive catastrophic memory may be as disabling as it is instructive, Gray and Oliver stress the necessity of rendering the phenomenon subject to secular critical inquiry. The value of such an approach is then demonstrated in a series of case studies.

Paul John Eakin's earlier work Fictions in Autobiography is a key text in autobiography studies. In it he proposed that the self that finds expression in autobiography is in fundamental ways a kind of fictive construct, a fiction articulated in a fiction. In this new book Eakin turns his attention to what he sees as the defining assumption of autobiography: that the story of the self does refer to a world of biographical and historical fact. Here he shows that people write autobiography not in some private realm of the autonomous self but rather in strenuous engagement with the pressures that life in culture entails. In so demonstrating, he offers fresh readings of autobiographies by Roland Barthes, Nathalie Sarraute, William Maxwell, Henry James, Ronald Fraser, Richard Rodriguez, Henry Adams, Patricia Hampl, John Updike, James McConkey, and Lillian Hellman. In the introduction Eakin makes a case for reopening the file on reference in autobiography, and in the first chapter he establishes the complexity of the referential aesthetic of the genre, the intricate interplay of fact and fiction in such texts. In subsequent chapters he explores some of the major contexts of reference in autobiography: the biographical, the social and cultural, the historical, and finally, underlying all the rest, the somatic and temporal dimensions of the lived experience of identity. In his discussion of contemporary theories of the self, Eakin draws especially on cultural anthropology and developmental psychology.

Considers interesting and important compounds of low molecular weight ranging from alicyclic to heterocyclic and biologically active compounds. Short sections on each structure begin with a suitable, usually historical, introduction and are discussed with reference to related topics in order to lead to a deeper understanding of the foundations and interrelations of various disciplines as well as stimulate interest in peculiarities of structures, syntheses and mechanisms, spectroscopic and biological properties. Features numerous stereodrawings of the molecules based on the results of X-ray crystal structure analysis.

This book argues that catastrophe is a particular way of governing future events – such as terrorism, climate change or pandemics – which we cannot predict but which may strike suddenly, without warning, and cause irreversible damage. At a time where catastrophe increasingly functions as a signifier of our future, imaginaries of pending doom have fostered new modes of anticipatory knowledge and redeployed existing ones. Although it shares many similarities with crises, disasters, risks and other disruptive incidents, this book claims that catastrophes also bring out the very limits of knowledge and management. The politics of catastrophe is turned towards an unknown future, which must be imagined and inhabited in order to be made palpable, knowable and actionable. Politics of Catastrophe critically assesses the effects of these new practices of knowing and governing catastrophes to come and challenges the reader to think about the possibility of an alternative politics of catastrophe. This book will be of interest to students of critical security studies, risk theory, political theory and International Relations in general.

This book employs Cognitive Literary Theory in an analysis of Conceptual and Intertextual Blending in the Gospel of Philip and the Exegesis on the Soul, read as Christian texts contemporary with the production and use of the Nag Hammadi Codices.

Autobiography is naturally regarded as an art of retrospect, but making autobiography is equally part of the fabric of our ongoing experience. We tell the stories of our lives piecemeal, and these stories are not merely about our selves but also an integral part of them. In this way we "live autobiographically"; we have narrative identities. In this book, noted life-writing scholar Paul John Eakin explores the intimate, dynamic connection between our selves and our stories, between narrative and identity in everyday life. He draws on a wide range of autobiographical writings from work by Jonathan Franzen, Mary Karr, and André Aciman to the New York Times series "Portraits of Grief" memorializing the victims of 9/11, as well as the latest insights into identity formation from the fields of developmental psychology, cultural anthropology, and neurobiology. In his account, the self-fashioning in which we routinely, even automatically, engage is largely conditioned by social norms and biological necessities. We are taught by others how to say who we are, while at the same time our sense of self is shaped decisively by our lives in and as bodies. For Eakin, autobiography is always an act of self-determination, no matter what the circumstances, and he stresses its adaptive value as an art that helps to anchor our shifting selves in time.

Traversing far flung Jewish communities in South Africa, Australia, Texas, Brazil, China, New Zealand, Quebec, and elsewhere, this wide-ranging collection explores the notion of "frontier" in the Jewish experience as a historical/geographical reality and a conceptual framework. As a compelling alternative to viewing the periphery only as a locus of dispossession and exile from the "homeland, " this work imagines a new Jewish history written as the history of the Jews at the frontier. In this new history, governed by the dynamics of change, confrontation, and accommodation, marginalized experiences are brought to the center and all participants are given voice. By articulating the tension between the center/periphery model and the frontier model, Jewries at the Frontier shows how the productive confrontation between and among cultures and peoples generates a new, multivocal account of Jewish history.