Which is more dangerous, a gun or a swimming pool? What do schoolteachers and sumo wrestlers have in common? How much do parents really matter? These may not sound like typical questions for an economist to ask. But Steven D. Levitt is not a typical economist. He studies the riddles of everyday life--from cheating and crime to parenting and sports--and reaches conclusions that turn conventional wisdom on its head. Freakonomics is a groundbreaking collaboration between Levitt and Stephen J. Dubner, an award-winning author and journalist. They set out to explore the inner workings of a crack gang, the truth about real estate agents, the secrets of the Ku Klux Klan, and much more. Through forceful storytelling and wry insight, they show that economics is, at root, the study of incentives--how people get what they want or need, especially when other people want or need the same thing.

Assume nothing, question everything. This is the message at the heart of Freakonomics, Levitt and Dubner's rule-breaking, iconoclastic book about crack dealers, cheating teachers and bizarre baby names that turned everyone's view of the world upside-down and became an international multi-million-copy-selling phenomenon. 'Prepare to be dazzled' Malcolm Gladwell 'A sensation ... you'll be stimulated, provoked and entertained. Of how many books can that be said?' Sunday Telegraph 'Has you chuckling one minute and gasping in amazement the next' Wall Street Journal 'Dazzling ... a delight' Economist 'Made me laugh out loud' Scotland on Sunday 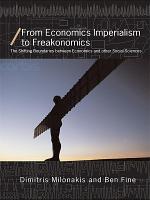 Is or has economics ever been the imperial social science? Could or should it ever be so? These are the central concerns of this book. It involves a critical reflection on the process of how economics became the way it is, in terms of a narrow and intolerant orthodoxy, that has, nonetheless, increasingly directed its attention to appropriating the subject matter of other social sciences through the process termed "economics imperialism". In other words, the book addresses the shifting boundaries between economics and the other social sciences as seen from the confines of the dismal science, with some reflection on the responses to the economic imperialists by other disciplines. Significantly, an old economics imperialism is identified of the "as if market" style most closely associated with Gary Becker, the public choice theory of Buchanan and Tullock and cliometrics. But this has given way to a more "revolutionary" form of economics imperialism associated with the information-theoretic economics of Akerlof and Stiglitz, and the new institutional economics of Coase, Wiliamson and North. Embracing one "new" field after another, economics imperialism reaches its most extreme version in the form of "freakonomics", the economic theory of everything on the basis of the most shallow principles. By way of contrast and as a guiding critical thread, a thorough review is offered of the appropriate principles underpinning political economy and its relationship to social science, and how these have been and continue to be deployed. The case is made for political economy with an interdisciplinary character, able to bridge the gap between economics and other social sciences, and draw upon and interrogate the nature of contemporary capitalism.

Quicklets: Learn More. Read Less. Freakonomics was written by Steven D. Levitt and Stephen J. Dubner. Levitt is an economist who is known for making connections that other people do not see, while Dubner is a journalist for the New York Times. The book started as an article about Levitt that Dubner was writing for the New York Times in 2003. They wrote the book together as an attempt to bring economics to the masses, to show in an interesting and conversational way on how economics can prove that conventional wisdom is often wrong and how it can shed new light on confusing situations. The book was published in 2005 and has somewhat become controversial for its findings.

Steven Levitt, the original rogue economist, and Stephen Dubner have spent four years uncovering the hidden side of even more controversial subjects, from terrorism to shark attacks, cable TV to hurricanes. The result is Superfreakonomics. It reveals, among other things: - Why you are more likely to be killed walking drunk than driving drunk - How a prostitute is more likely to sleep with a policeman than be arrested by one - Why terrorists might be easier to track down than you would imagine - How a sex change could boost your salary Because sometimes the most superfreaky solution is the simplest.

Now in Paperback—the New York Times bestseller—and follow up to the revolutionary bestsellers Freakonomics and SuperFreakonomics—with a new author Q&A. With their trademark blend of captivating storytelling and unconventional analysis, Steven D. Levitt and Stephen J. Dubner take us inside their thought process and teach us all how to think a bit more productively, more creatively, more rationally. In Think Like A Freak, they offer a blueprint for an entirely new way to solve problems, whether your interest lies in minor lifehacks or major global reforms. The topics range from business to philanthropy to sports to politics, all with the goal of retraining your brain. Along the way, you’ll learn the secrets of a Japanese hot-dog-eating champion, the reason an Australian doctor swallowed a batch of dangerous bacteria, and why Nigerian e-mail scammers make a point of saying they’re from Nigeria. Levitt and Dubner plainly see the world like no one else. Now you can too. Never before have such iconoclastic thinkers been so revealing—and so much fun to read.

Cult bestseller and new buzz word, Freakonomics is at the heart of everything we see and do, and the subjects which bedevil us daily - from parenting to crime, sport to politics, fat to cheating, fear to traffic jams. Asking provocative and profound questions about human motivation and contemporary living and reaching some astonishing conclusions, Freakonomics will make you see the familiar world through a completely original lens.