Search Results for: from sawdust to stardust

In the forty-year history of Star Trek®, none of the television show's actors are more beloved than DeForest Kelley. His portrayal of Leonard "Bones" McCoy, the southern physician aboard the Starship Enterprise™, brought an unaffected humanity to the groundbreaking space frontier series. Jackson DeForest Kelley came of age in Depression-era Georgia. He was raised on the sawdust trail, a preacher's kid steeped in his father's literal faith and judgment. But De's natural artistic gifts called him to a different way, and a visit to California at seventeen showed a bright new world. Theater and radio defined his early career -- but it was a World War II training film he made while serving in the Army Air Corps that led to his first Paramount Studios contract. After years of struggle, his lean, weathered look became well known in notable westerns and television programs such as You Are There and Bonanza. But his work on several pilots for writer-producer Gene Roddenberry changed his destiny and the course of cultural history. This thoroughly researched actor's life is about hard work and luck, loyalty and love. It is a journey that takes us all...from sawdust to stardust.

Poems celebrate the life and accomplishments of the courageous and multi-talented Jacqueline Cochran. 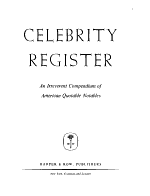