Search Results for: from the palmer raids to the patriot act

Presents a comprehensive history of the evolution of free speech in America over the last century.

Discusses the USA PATRIOT Act of 2001, describing its origins in the aftermath of the September 11 attacks, its provisions and extent, opposition and challenges, the issues at stake, and its renewal in 2006.

This book will provide the reader with a chronological review of the Supreme Court jurisprudence on the Commander-in-Chief power of the President and how the Court developed and enforced the boundaries around the height, depth, and width of that power over the past two centuries.

The horrendous events of September 11, 2001, heightened awareness of terrorism unlike all but a handful of major catastrophes in American history. Like the Japanese attack on Pearl Harbor on December 7, 1941, and President Kennedy’s assassination on November 22, 1963, 9/11 is a date forever enshrined in our national memory. But 9/11 once again raised the question: What should government do to eliminate or reduce the likelihood of a future attack? How should national leadership balance its responsibility to protect the civil liberties of U.S. citizens with its sworn duty to protect their lives? In The Safety of the Kingdom, J. Michael Martinez takes up the question of how the United States government has responded to terrorist attacks and, in the absence of an attack, the fear of foreign and subversive elements that may harm the nation. In some cases, the government “overreaction” led to a series of abuses that amplified the severity of the original threat. Rather than selecting every instance of government reaction to threats, Martinez examines representative cases, from the alien and sedition acts in the eighteenth century to the post-9/11 “war on terror.” Edward Snowden’s disclosure of classified information related to the NSA’s surveillance program brought to the fore an important debate about government scrutiny of its citizens. As J. Michael Martinez makes clear in this book, it is a debate that has been ongoing for centuries. Skyhorse Publishing, as well as our Arcade imprint, are proud to publish a broad range of books for readers interested in history--books about World War II, the Third Reich, Hitler and his henchmen, the JFK assassination, conspiracies, the American Civil War, the American Revolution, gladiators, Vikings, ancient Rome, medieval times, the old West, and much more. While not every title we publish becomes a New York Times bestseller or a national bestseller, we are committed to books on subjects that are sometimes overlooked and to authors whose work might not otherwise find a home.

"A social history of alcoholism in the United States, from the seventeenth century to the present day Today, millions of Americans are struggling with alcoholism, but millions are also in long-term recovery. Alcoholics Anonymous and a growing number of recovery organizations are providing support for alcoholics who will face the danger of relapse for the rest of their lives. We have finally come to understand alcoholism as a treatable illness, rather than a moral failure. Today's advocates can draw inspiration from the victories of sober drunks throughout American history. Christopher Finan recounts the nation's history with alcohol and its search for sobriety, which began among Native Americans in the colonial period, when liquor was used to cheat them of their property. He introduces us to the first of a colorful cast of characters, a remarkable Iroquois leader named Handsome Lake, who dedicated his life to helping his people renounce hard liquor. And we meet Carrie Nation, the wife of an alcoholic who destroyed bars with an ax in her anger over what alcohol had done to her family, as well as the idealistic and energetic Washingtonians, reformed drunks who led the first national movement to save men like themselves. Finan also tells the dramatic story of Bill Wilson and Dr. Bob Smith, the two drunks who helped each other stay sober and then created AA, which survived its tumultuous early years and has made it possible for millions of men and women to quit drinking. This is narrative history at its best: entertaining and authoritative, an important portrait of one of America's great liberation movements"--

Before World War I, the government reaction to labor dissent had been local, ad hoc, and quasi-military. Sheriffs, mayors, or governors would deputize strikebreakers or call out the state militia, usually at the bidding of employers. When the United States entered the conflict in 1917, government and industry feared that strikes would endanger war production; a more coordinated, national strategy would be necessary. To prevent stoppages, the Department of Justice embarked on a sweeping new effort—replacing gunmen with lawyers. The department systematically targeted the nation’s most radical and innovative union, the Industrial Workers of the World, also known as the Wobblies, resulting in the largest mass trial in U.S. history. In the first legal history of this federal trial, Dean Strang shows how the case laid the groundwork for a fundamentally different strategy to stifle radical threats, and had a major role in shaping the modern Justice Department. As the trial unfolded, it became an exercise of raw force, raising serious questions about its legitimacy and revealing the fragility of a criminal justice system under great external pressure.

Bridgeport, Connecticut: 1913. Austin Voronkov is a Russian immigrant working in a factory. When he falls in love with Julia – the daughter of his landlady – the American Dream feels within reach. But after he is wrongly accused of attending an anarchist gathering and is deported, that dream becomes a nightmare. Spanning four decades and three continents, The Invention of Exile is the story of an epic love that is tested over and over again,but never broken. Stuck in a strange land, separated fromhis family and unable to see his children grow up, Austin becomesa pawn in the cat-and-mouse game of political antagonism betweenthe United States and the new Soviet Union. But with steadfastcourage and unwavering devotion, Julia finds a way to keeptheir love alive.

Truthout’s Progressive Pick of the Week Ralph Nader’s 10 Books to Provoke Conversation in 2014 Every year since 1976, Project Censored, our nation's oldest news-monitoring group--a university-wide project at Sonoma State University founded by Carl Jensen, directed for many years by Peter Phillips, and now under the leadership of Mickey Huff--has produced a Top-25 list of underreported news stories and a book, Censored, dedicated to the stories that ought to be top features on the nightly news, but that are missing because of media bias and self-censorship. Seven Stories Press has been publishing this yearbook since 1994, featuring the top stories listed democratically in order of importance according to an international panel of judges. Beyond the Top-25 stories, additional chapters delve further into timely media topics: The Censored News and Media Analysis section provides annual updates on Junk Food News and News Abuse, Censored Deja Vu, signs of hope in the alternative and news media, and the state of media bias and alternative coveragearound the world. In the Truth Emergency section, scholars and journalists take a critical look at the US/NATO military-industrial-media empire. And in the Project Censored International section, the meaning of media democracy worldwide is explored in close association with Project Censored affiliates in universities and at media organizations all over the world. A perennial favorite of booksellers, teachers, and readers everywhere, Censored is one of the strongest lifesigns of our current collective desire to get the news we citizens need--despite what Big Media tells us.

In a stinging dissent to a 1961 Supreme Court decision that allowed the Illinois state bar to deny admission to prospective lawyers if they refused to answer political questions, Justice Hugo Black closed with the memorable line, "We must not be afraid to be free." Black saw the First Amendment as the foundation of American freedom--the guarantor of all other Constitutional rights. Yet since free speech is by nature unruly, people fear it. The impulse to curb or limit it has been a constant danger throughout American history. In We Must Not Be Afraid to Be Free, Ron Collins and Sam Chaltain, two noted free speech scholars and activists, provide authoritative and vivid portraits of free speech in modern America. The authors offer a series of engaging accounts of landmark First Amendment cases, including bitterly contested cases concerning loyalty oaths, hate speech, flag burning, student anti-war protests, and McCarthy-era prosecutions. The book also describes the colorful people involved in each case--the judges, attorneys, and defendants--and the issues at stake. Tracing the development of free speech rights from a more restrictive era--the early twentieth century--through the Warren Court revolution of the 1960s and beyond, Collins and Chaltain not only cover the history of a cherished ideal, but also explain in accessible language how the law surrounding this ideal has changed over time. Essential for anyone interested in this most fundamental of our rights, We Must Not Be Afraid to Be Free provides a definitive and lively account of our First Amendment and the price courageous Americans have paid to secure them.

During the last four decades the German Revolution 1918/19 has only attracted little scholarly attention. This volume offers new cultural historical perspectives, puts this revolution into a wider time frame (1916-23), and coheres around three interlinked propositions: (i) acknowledging that during its initial stage the German Revolution reflected an intense social and political challenge to state authority and its monopoly of physical violence, (ii) it was also replete with »Angst«-ridden wrangling over its longer-term meaning and direction, and (iii) was characterized by competing social movements that tried to cultivate citizenship in a new, unknown state. 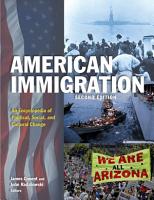 Thoroughly revised and expanded, this is the definitive reference on American immigration from both historic and contemporary perspectives. It traces the scope and sweep of U.S. immigration from the earliest settlements to the present, providing a comprehensive, multidisciplinary approach to all aspects of this critically important subject. Every major immigrant group and every era in U.S. history are fully documented and examined through detailed analysis of social, legal, political, economic, and demographic factors. Hot-topic issues and controversies - from Amnesty to the U.S.-Mexican Border - are covered in-depth. Archival and contemporary photographs and illustrations further illuminate the information provided. And dozens of charts and tables provide valuable statistics and comparative data, both historic and current. A special feature of this edition is the inclusion of more than 80 full-text primary documents from 1787 to 2013 - laws and treaties, referenda, Supreme Court cases, historical articles, and letters.

A comprehensive two-volume overview and analysis of all facets of espionage in the American historical experience, focusing on key individuals and technologies. * Includes over 750 entries in chronologically organized sections, covering important spies, spying technologies, and events * Written by an expert team of contributing scholars from a variety of fields within history and political science * Provides a chronology of key events related to the use of espionage by the United States or by enemies within our borders * A glossary of key espionage terms * An extensive bibliography of print and electronic resources for further reading * Photos of key individuals plus maps of geographical locations and military engagements where espionage played an important role

Speaking Ill of the Dead: Jerks in Washington, D.C., history features 15 short biographies of notorious badguys, perpetrators of mischief, visionary if misunderstood thinkers, and other colorful anti-heroes from the history of the nation's capital.

Teaching for Dissent looks at the implications of new forms of dissent for educational practice. The reappearance of dissent in political meetings and street protests opens new possibilities for improved democratic life and citizen participation. This book argues that this possibility will not be fulfilled if schools do not cultivate the skills necessary for our citizens to engage in political dissent. The authors look at how practices in schools, such as the testing regime and the 'hidden curriculum', suppress students' ability to voice ideas that stand in opposition to the status quo. Teaching for Dissent calls for a realignment of the curriculum and the practices of schooling with a guiding vision of democratic participation.