Search Results for: from virile woman to womanchrist

Why did hagiographers of the late Middle Ages praise mothers for abandoning small children? How did a group of female mystics come to define themselves as "apostles to the dead" and end by challenging God's right to damn? Why did certain heretics around 1300 venerate a woman as the Holy Spirit incarnate and another as the Angelic Pope? In From Virile Woman to WomanChrist, Barbara Newman asks these and other questions to trace a gradual and ambiguous transition in the gender strategies of medieval religious women. An egalitarian strain in early Christianity affirmed that once she asserted her commitment to Christ through a vow of chastity, monastic profession, or renunciation of family ties, a woman could become "virile," or equal to a man. While the ideal of the "virile woman" never disappeared, another ideal slowly evolved in medieval Christianity. By virtue of some gender-related trait—spotless virginity, erotic passion, the capacity for intense suffering, the ability to imagine a feminine aspect of the Godhead—a devout woman could be not only equal, but superior to men; without becoming male, she could become a "womanChrist," imitating and representing Christ in uniquely feminine ways. Rooted in women's concrete aspirations and sufferings, Newman's "womanChrist" model straddles the bounds of orthodoxy and heresy to illuminate the farther reaches of female religious behavior in the Middle Ages. From Virile Woman to WomanChrist will generate compelling discussion in the fields of medieval literature and history, history of religion, theology, and women's studies.

Contrary to popular belief, the medieval religious imagination did not restrict itself to masculine images of God but envisaged the divine in multiple forms. In fact, the God of medieval Christendom was the Father of only one Son but many daughters—including Lady Philosophy, Lady Love, Dame Nature, and Eternal Wisdom. God and the Goddesses is a study in medieval imaginative theology, examining the numerous daughters of God who appear in allegorical poems, theological fictions, and the visions of holy women. We have tended to understand these deities as mere personifications and poetic figures, but that, Barbara Newman contends, is a mistake. These goddesses are neither pagan survivals nor versions of the Great Goddess constructed in archetypal psychology, but distinctive creations of the Christian imagination. As emanations of the Divine, mediators between God and the cosmos, embodied universals, and ravishing objects of identification and desire, medieval goddesses transformed and deepened Christendom's concept of God, introducing religious possibilities beyond the ambit of scholastic theology and bringing them to vibrant imaginative life. Building a bridge between secular and religious conceptions of allegorized female power, Newman advances such questions as whether medieval writers believed in their goddesses and, if so, in what manner. She investigates whether the personifications encountered in poetic fictions can be distinguished from those that appear in religious visions and questions how medieval writers reconcile their statements about the multiple daughters of God with orthodox devotion to the Son of God. Furthermore, she examines why forms of feminine God-talk that strike many Christians today as subversive or heretical did not threaten medieval churchmen. Weaving together such disparate texts as the writings of Latin and vernacular poets, medieval schoolmen, liturgists, and male and female mystics and visionaries, God and the Goddesses is a direct challenge to modern theologians to reconsider the role of goddesses in the Christian tradition.

How, Barbara Newman asks, did the myth of the separable heart take such a firm hold in the Middle Ages, from lovers exchanging hearts with one another to mystics exchanging hearts with Jesus? What special traits gave both saints and demoniacs their ability to read minds? Why were mothers who died in childbirth buried in unconsecrated ground? Each of these phenomena, as diverse as they are, offers evidence for a distinctive medieval idea of the person in sharp contrast to that of the modern "subject" of "individual." Starting from the premise that the medieval self was more permeable than its modern counterpart, Newman explores the ways in which the self's porous boundaries admitted openness to penetration by divine and demonic spirits and even by other human beings. She takes up the idea of "coinherence," a state familiarly expressed in the amorous and devotional formula "I in you and you in me," to consider the theory and practice of exchanging the self with others in five relational contexts of increasing intimacy. Moving from the outside in, her chapters deal with charismatic teachers and their students, mind-reading saints and their penitents, lovers trading hearts, pregnant mothers who metaphorically and literally carry their children within, and women and men in the throes of demonic obsession. In a provocative conclusion, she sketches some of the far-reaching consequences of this type of personhood by drawing on comparative work in cultural history, literary criticism, anthropology, psychology, and ethics. The Permeable Self offers medievalists new insight into the appeal and dangers of the erotics of pedagogy; the remarkable influence of courtly romance conventions on hagiography and mysticism; and the unexpected ways that pregnancy--often devalued in mothers--could be positively ascribed to men, virgins, and God. The half-forgotten but vital idea of coinherence is of relevance far beyond medieval studies, however, as Newman shows how it reverberates in such puzzling phenomena as telepathy, the experience of heart transplant recipients who develop relationships with their deceased donors, the phenomenon of psychoanalytic transference, even the continuities between ideas of demonic possession and contemporary understandings of obsessive-compulsive disorder. In The Permeable Self Barbara Newman once again confirms her status as one of our most brilliant and thought-provoking interpreters of the Middle Ages.

Nine hundred years ago in Paris, a teacher and his brilliant female student fell in love and chronicled their affair in a passionate correspondence. Their 116 surviving letters, some whole and some fragmentary, are composed in eloquent, highly rhetorical Latin. Since their discovery in the late twentieth century, the Letters of Two Lovers have aroused much attention because of their extreme rarity. They constitute the longest correspondence by far between any two persons from the entire Middle Ages, and they are private rather than institutional—which means that, according to all we know about the transmission of medieval letters, they should not have survived at all. Adding to their mystery, the letters are copied anonymously in a single late fifteenth-century manuscript, although their style and range of reference place them squarely in the early twelfth century. Can this collection of correspondence be the previously lost love letters of Abelard and Heloise? And even if not, what does it tell us about the lived experience of love in the twelfth century? Barbara Newman contends that these teacher-student exchanges bear witness to a culture that linked Latin pedagogy with the practice of ennobling love and the cult of friendship during a relatively brief period when women played an active part in that world. Newman presents a new translation of these extraordinary letters, along with a full commentary and two extended essays that parse their literary and intellectual contexts and chart the course of the doomed affair. Included, too, are two other sets of twelfth-century love epistles, the Tegernsee Letters and selections from the Regensburg Songs. Taken together, they constitute a stunning contribution to the study of the history of emotions by one of our most prominent medievalists.

Heloise, the twelfth-century French abbess and reformer, emerges from this book as one of history's most extraordinary women, a thinker-writer of profound insight and skill. Her supple and learned mind attracted the most radical philosopher of her time, Peter Abelard. He became her teacher, lover, husband, and finally monastic ally. That relationship has made her fame until now. But Heloise is far more important in her own right. Seventeen experts of international standing collaborate here to reveal and analyze how Heloise's daring achievements shaped normative issues of theology, rhetoric, rational argument, gender, and emotional authenticity. At last we are able to see her for herself, in her moment of history and human awareness. 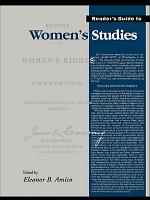 The Reader's Guide to Women's Studies is a searching and analytical description of the most prominent and influential works written in the now universal field of women's studies. Some 200 scholars have contributed to the project which adopts a multi-layered approach allowing for comprehensive treatment of its subject matter. Entries range from very broad themes such as "Health: General Works" to entries on specific individuals or more focused topics such as "Doctors."

This book contains a multidisciplinary collection of studies on women in miracle stories found in texts ranging from religious classics to contemporary literary fiction. Miracle stories are a genre of great importance for the study of women's religious inheritance and for the historical and cultural understanding of women as 'makers of faith'. Miracle stories are very generally speaking more open to popular religion and culture than, for instance, doctrinal and official ecclesiastical texts, and as such, they can be of special interest to the study of women's lives and religious aspirations. Remarkably, up till now this genre has not been looked at from this point of view. This book aims to open this field for further research by presenting case studies from diverse angles and disciplines. Some of the questions this book tries to answer are: What do miracle stories specifically tell us about women? Are there some (types of) miracles that are in particular related to (certain groups of) women? What do these stories tell us about women as performers and/or subjects of miracles? What can be said about the social function and religious meaning of miracles by specifically looking at the way certain groups of women are practising and experiencing miracles? By including research on miracle stories in contemporary fiction written by women this book also wants to acknowledge and research the disputed status of 'miracles' as well of 'women' in our present society which is moving from modernity to post-modernity.

The early Christian writer Tertullian first applied the epithet "bride of Christ" to the uppity virgins of Carthage as a means of enforcing female obedience. Henceforth, the virgin as Christ's spouse was expected to manifest matronly modesty and due submission, hobbling virginity's ancient capacity to destabilize gender roles. In the early Middle Ages, the focus on virginity and the attendant anxiety over its possible loss reinforced the emphasis on claustration in female religious communities, while also profoundly disparaging the nonvirginal members of a given community. With the rising importance of intentionality in determining a person's spiritual profile in the high Middle Ages, the title of bride could be applied and appropriated to laywomen who were nonvirgins as well. Such instances of democratization coincided with the rise of bridal mysticism and a progressive somatization of female spirituality. These factors helped cultivate an increasingly literal and eroticized discourse: women began to undergo mystical enactments of their union with Christ, including ecstatic consummations and vivid phantom pregnancies. Female mystics also became increasingly intimate with their confessors and other clerical confidants, who were sometimes represented as stand-ins for the celestial bridegroom. The dramatic merging of the spiritual and physical in female expressions of religiosity made church authorities fearful, an anxiety that would coalesce around the figure of the witch and her carnal induction into the Sabbath.