This collection of essays examines the construction of gender norms in early modern and modern Germany.; The modes of reinforcement by the state, the church, the law and marriage, and the resistance to these norms by individuals, are central to each of the contributions.; It examines discourses of the body and sexuality and the relations between gender and power. Similarly, the usefulness of the "public/private paradigm" familiar to gender historians is further challenged. 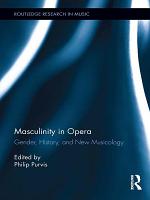 This book addresses the ways in which masculinity is negotiated, constructed, represented, and problematized within operatic music and practice. Although the consideration of masculine ontology and epistemology has pervaded cultural and sociological studies since the late 1980s, and masculinity has been the focus of recent if sporadic musicological discussion, the relationship between masculinity and opera has so far escaped detailed critical scrutiny. Operating from a position of sympathy with feminist and queer approaches and the phallocentric tendencies they identify, this study offers a unique perspective on the cultural relativism of opera by focusing on the male operatic subject. Anchored by musical analysis or close readings of musical discourse, the contributions take an interdisciplinary approach by also engaging with theatre, popular music, and cultural musicology scholarship. The various musical, theoretical, and socio-political trajectories of the essays are historically dispersed from seventeenth to twentieth- first-century operatic works and practices, visiting masculinity and the operatic voice, the complication or refusal of essentialist notions of masculinity, and the operatic representation of the ‘crisis’ of masculinity. This volume will not only enliven the study of masculinity in opera, but be an appealing contribution to music scholars interested in gender, history, and new musicology.

First published in 1996. Routledge is an imprint of Taylor & Francis, an informa company.

In spite of having been short-lived, "Weimar" has never lost its fascination. Until recently the Weimar Republic's place in German history was primarily defined by its catastrophic beginning and end - Germany's defeat in 1918 and the Nazi seizure of power in 1933; its history seen mainly in terms of politics and as an arena of flawed decisions and failed compromises. However, a flourishing of interdisciplinary scholarship on Weimar political culture is uncovering arenas of conflict and change that had not been studied closely before, such as gender, body politics, masculinity, citizenship, empire and borderlands, visual culture, popular culture and consumption. This collection offers new perspectives from leading scholars in the disciplines of history, art history, film studies, and German studies on the vibrant political culture of Germany in the 1920s. From the traumatic ruptures of defeat, revolution, and collapse of the Kaiser's state, the visionaries of Weimar went on to invent a republic, calling forth new citizens and cultural innovations that shaped the republic far beyond the realms of parliaments and political parties.

"On the feast of St. Michael, September 1659, a thirteen-year-old peasant girl left her family's rural home to work as a maid in the nearby city of Brunswick. Just two years later, Grethe Schmidt found herself imprisoned and accused of murdering her bastard child. Filled with political intrigue, Death and a Maiden tells a fascinating story that began in the bedchamber of a house in Brunswick and ended at the court of Duke Augustus in the city of Wolfenbüttel. No one was ever able to prove conclusively that Grethe had been pregnant and no infant's body was ever found to justify her prosecution. But, from one accusation, Grethe's tale spiraled outward to set a defense lawyer and legal theorist against powerful city magistrates and then upward to a legal contest between that city and its overlord, the Duchy of Brunswick, with the city's ancient liberties hanging in the balance. Myers weaves the story of Grethe's arrest, torture, trial, and sentence for "suspected infanticide," into a detailed account of the workings of the criminal system in continental Europe, including the nature of interrogations, the process of torture, and the creation of a "criminal" identity over time. He presents an in-depth examination of a system in which torture was both legal and an important part of criminal investigations. This story serves as a captivating slice of European history as well as a highly informative look at the condition of poor women and the legal system in mid-17th century Germany. General readers and scholars alike will be riveted by Grethe's ordeal."--Publisher's website.

Volume 3 of The Cambridge History of the First World War explores the social and cultural history of the war and considers the role of civil society throughout the conflict; that is to say those institutions and practices outside the state through which the war effort was waged. Drawing on 25 years of historical scholarship, it sheds new light on culturally significant issues such as how families and medical authorities adapted to the challenges of war and the shift that occurred in gender roles and behaviour that would subsequently reshape society. Adopting a transnational approach, this volume surveys the war's treatment of populations at risk, including refugees, minorities and internees, to show the full extent of the disaster of war and, with it, the stubborn survival of irrational kindness and the generosity of spirit that persisted amidst the bitterness at the heart of warfare, with all its contradictions and enduring legacies.

This is a major new textbook, designed for students in all disciplines seeking an introduction to the very latest research on all aspects of women's lives in Europe from 1500 to 1750, and on the development of the notions of masculinity and femininity. The coverage is geographically broad, ranging from Spain to Scandinavia, and from Russia to Ireland, and the topics investigated include the female life-cycle, literacy, women's economic role, sexuality, artistic creations, female piety - and witchcraft - and the relationship between gender and power. To aid students each chapter contains extensive notes on further reading (but few footnotes), and the approach throughout is designed to render the subject in as accessible and stimulating manner as possible. Women and Gender in Early Modern Europe is suitable for usage on numerous courses in women's history, early modern European history, and comparative history.

Writing on the history of German women has - like women's history elsewhere - undergone remarkable expansion and change since it began in the late 1960s. Today Women's history still continues to flourish alongside gender history but the focus of research has increasingly shifted from women to gender. This shift has made it possible to make men and masculinity objects of historical research too. After more than thirty years of research, it is time for a critical stocktaking of the "gendering" of the historiography on nineteenth and twentieth century Germany. To provide a critical overview in a comparative German-American perspective is the main aim of this volume, which brings together leading experts from both sides of the Atlantic. They discuss in their essays the state of historiography and reflect on problems of theory and methodology. Through compelling case studies, focusing on the nation and nationalism, military and war, colonialism, politics and protest, class and citizenship, religion, Jewish and non-Jewish Germans, the Holocaust, the body and sexuality and the family, this volume demonstrates the extraordinary power of the gender perspective to challenge existing interpretations and rewrite mainstream arguments.

Modern woman was made between the French Revolution and the end of the First World War. In this time, the women of Europe crafted new ideas about their sexuaity, motherhood, the home, the politics of femininity, and their working roles. They faced challenges about what a woman should be and how she should act. From domestic ideology to women's suffrage, this book charts the contests for woman's identity in the epoch-shaping nineteenth century.

Frankfurt am Main, in common with other imperial German cities, enjoyed a large degree of legal autonomy during the early modern period, and produced a unique and rich body of criminal archives. In particular, Frankfurt’s Strafenbuch, which records all criminal sentences between 1562 and 1696, provides a fascinating insight into contemporary penal trends. Drawing on this and other rich resources, Dr. Boes reveals shifting and fluid attitudes towards crime and punishment and how these were conditioned by issues of gender, class, and social standing within the city’s establishment. She attributes a significant role in this process to the steady proliferation of municipal advocates, jurists trained in Roman Law, who wielded growing legal and penal prerogatives. Over the course of the book, it is demonstrated how the courts took an increasingly hard line with select groups of people accused of criminal behavior, and the open manner with which advocates exercised cultural, religious, racial, gender, and sexual-orientation repressions. Parallel with this, however, is identified a trend of marked leniency towards soldiers who enjoyed an increasingly privileged place within the judicial system. In light of this discrepancy between the treatment of civilians and soldiers, the advocates’ actions highlight the emergence and spread of a distinct military judicial culture and Frankfurt’s city council’s contribution to the quasi-militarization of a civilian court. By highlighting the polarized and changing ways the courts dealt with civilian and military criminals, a fuller picture is presented not just of Frankfurt’s sentencing and penal practices, but of broader attitudes within early modern Germany to issues of social position and cultural identity.

Among the many works written about Weimar culture early examinations generally ignored the consuming public. In those few instances when the public was considered, it was perceived as a passive, unified entity. It is only recently and thanks to feminist and cultural theory that the concept of a monolithic audience or reading public was dismantled and that categories such as gender have been recognised as crucial to an analysis of the culture industry. This book focuses on the popular fiction of Weimar Germany and explores the relationship between women, the texts they read, and the society in which they live, not only in the fiction but also in the reality that shaped its fictional representations.

Examining the social effects of criminal investigation in Weimar-era Berlin

A Deep Exploration of the Rise, Reign, and Legacy of the Third Reich For its brief existence, National Socialist Germany was one of the most destructive regimes in the history of humankind. Since that time, scholarly debate about its causes has volleyed continuously between the effects of political and military decisions, pathological development, or modernity gone awry. Was terror the defining force of rule, or was popular consent critical to sustaining the movement? Were the German people sympathetic to Nazi ideology, or were they radicalized by social manipulation and powerful propaganda? Was the “Final Solution” the motivation for the Third Reich’s rise to power, or simply the outcome? A Companion to Nazi Germany addresses these crucial questions with historical insight from the Nazi Party’s emergence in the 1920s through its postwar repercussions. From the theory and context that gave rise to the movement, through its structural, cultural, economic, and social impacts, to the era’s lasting legacy, this book offers an in-depth examination of modern history’s most infamous reign. Assesses the historiography of Nazism and the prehistory of the regime Provides deep insight into labor, education, research, and home life amidst the Third Reich’s ideological imperatives Describes how the Third Reich affected business, the economy, and the culture, including sports, entertainment, and religion Delves into the social militarization in the lead-up to war, and examines the social and historical complexities that allowed genocide to take place Shows how modern-day Germany confronts and deals with its recent history Today’s political climate highlights the critical need to understand how radical nationalist movements gain an audience, then followers, then power. While historical analogy can be a faulty basis for analyzing current events, there is no doubt that examining the parallels can lead to some important questions about the present. Exploring key motivations, environments, and cause and effect, this book provides essential perspective as radical nationalist movements have once again reemerged in many parts of the world.