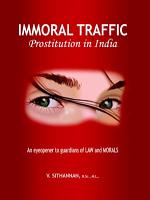 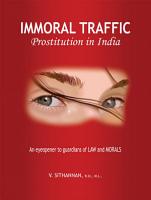 V. Sithannan, author of the title "Immoral Traffic - Prostitution in India", has marked it to the guardians of Law and Morals in India and the world. Standing firmly on the challenging locale of Indian Law and Legal System and drawing substance from his rich and varied experience as a Law Enforcement Officer of the Police Department of Tamil Nadu. Sithannan, in writing this monumental treatise, has fulfilled the longtime need of the Judicial Officers, Law Enforcement Authorities, Social Activists, NGOs, Gender Activists and the general public. In writing this volume, the academic quest of Sithannan has made him to cull out diverse facts and figures from various enactments, official documents and literature relating to Immoral Traffic and Prostitution. Further in this scholarly work, the author does not stop with expressing his sentiments of compassion for the Victims of Prostitution but he is concerned also with their rescue, rehabilitation and their decent placement in society, on a par with others. However, the agents, the brothel-runners and the traffickers in the trade of Prostitution come under his scathing attack and reprehensible condemnation, for these wolves, the world over , have made this ignoble profession into an industry, the third major lucrative global industry, next only to arms-smuggling and trade in narcotics. The Book contains 17 Chapters plus 3 Appendices. In these divisions, the author, talks about the types, causes and impact of prostitution, which result in various forms of harmful diseases. Further, a comparative picture of the legal status of Immoral Traffic in other countries is also given. Also, the author describes various instruments of Law, available for safeguarding the child victims of Trafficking and Prostitution. The Chapters on the Powers of the Police Officers and the Checklist(128) for Investigating Officers are path-breaking indeed! Judgment of cases on Immoral Trafficking and Prostitution, recorded in the Book, along with a list of the Powers of the Court, the Central and the State Governments would be a major source of reference material for the officials of Law and Governments. Apart from this, the 39 points on further role of NGO's and People's Organisations and other Social Activists in the field and would be of immense value, when they go for field work. The author has concluded the Book with suggestions and recommendations for arresting the menace of trafficking in persons and in this respect, he has made as many as 59 very valuable suggestions, besides giving 31 valid proposals and recommendations for effectively preventing child trafficking for purposes of prostitution and for engaging the child in worst forms of child labour. The Appendices have listed in a detailed way the Immoral Traffic (Prevention) Act, 1956, in detail in three aspects. This Title is a scholarly one appearing at the most appropriate time, when the scourge of HIV/AIDS is catching up in a developing country like India, as wild fire, capable of halting its economic progress. The author has rightly written in his Preface that when a Law Enforcement Officer reads this Book, he would ensure conviction for the offenders; when an Advocate goes through the Title, he will see to the acquittal of his clients; and when a Judicial Officer reads this Book and pronounces judgments on cases like these, he is sure to pronounce judgments marked by social concern and compassion for the victims-women and children. No wonder that this book is a must for all the advocates, social activists, gender rights workers, NGOs and researchers on Gender Studies and other guardians of Law and Morals.

What is the diversity of perspectives on sex work in India today? This edited volume addresses this question through its sections on feminist discourse, ethnographic studies, socio-economic-legal-health frameworks and cultural reflections. The first section explores the space for women in prostitution within mainstream feminist discourse in India, and the way it has evolved over time. The second section emphasizes on the heterogeneity of sex work practices with their historical vestiges, contemporary manifestations and urban-rural contrasts. The third section examines the interface of society and prostitution, tracing economic and social undercurrents, health concerns and legal regulations. The final section focuses on the bearings of prostitution on the cultural spheres of literature, language, cinema, theatre and media. In addition to rigorous academic research, this volume also pools in case studies, live discussions and interviews, drawing the experience of a wide spectrum of professionals and organizations working with sex workers. This book is a must-read for professionals and academicians in the fields of Gender Studies, Sociology, Anthropology, Public Health and Social Work.

What is to be done about prostitution? Is it work or is it violence? Are women involved in prostitution offenders or victims? Is prostitution a private or a political issue? The answers to these questions vary depending on many factors, including where in the world you live. This book provides a valuable, detailed international comparison of the laws, policies and interventions in eight countries across Europe (England and Wales, France, Sweden and Moldova) and Asia (India, Pakistan, Thailand and Taiwan). The countries were chosen because of their contrasting social policy and legislative frameworks. Specific topics covered include national social and historical contexts in relation to prostitution; legal frameworks - with discussion of existing laws and policies and debates around legislation and decriminalisation; key issues faced - particularly relating to reasons for entering prostitution and analysis of policies and interventions. The case studies are brought to life by giving voice to the experiences of women involved in prostitution themselves together with the personal reflections of the authors. Aimed at a wide audience of students, academics, policy makers and practitioners, this book makes an important contribution to academic and policy debates in the fields of criminology, law, social policy, women's studies, sociology, politics and international relations.

This book takes a reproductive justice approach to argue that surrogacy as practised in the contemporary neoliberal biomarkets crosses the humanitarian thresholds of feminism. Drawing on her ethnographic work with surrogate mothers, intended parents and medical practitioners in India, the author shows the dark connections between poverty, gender, human rights violations and indignity in the surrogacy market. In a developing country like India, bio-technologies therefore create reproductive objects of certain female bodies while promoting an image of reproductive liberation for others. India is a classic example for how far these biomarkets can exploit vulnerabilities for individual requirements in the garb of reproductive liberty. This critical book refers to a range of liberal, radical and postcolonial feminist frameworks on surrogacy, and questions the individual reproductive rights perspective as an approach to examine global surrogacy. It introduces ‘humanitarian feminism’ as an alternative concept to bridge feminist factions divided on contextual and ideological grounds. It hopes to build a global feminist solidarity drawing on a ‘reproductive justice’ approach by recognizing the histories of race, class, gender, sexuality, ability, age and immigration oppression in all communities. This work is of interest to researchers and students of medical sociology and anthropology, gender studies, bioethics, and development studies.