Cassia has always trusted the Society to make the right choices for her: what to read, what to watch, what to believe. So when Xander's face appears on-screen at her Matching ceremony, Cassia knows with complete certainty that he is her ideal mate . . . until she sees Ky Markham's face flash for an instant before the screen fades to black. The Society tells her it's a glitch, a rare malfunction, and that she should focus on the happy life she's destined to lead with Xander. But Cassia can't stop thinking about Ky, and as they slowly fall in love, Cassia begins to doubt the Society's infallibility and is faced with an impossible choice: between Xander and Ky, between the only life she's known and a path that no one else has dared to follow. Look for CROSSED, the sequel to MATCHED, in Fall 2011! Watch a Video

On her seventeenth birthday, Cassia meets her match. Society dictates he is her perfect partner for life. Except he's not. In Cassia's society, Officials decide who people love. How many children they have. Where they work. When they die. But, as Cassia finds herself falling in love with another boy, she is determined to make some choices of her own. And that's when her whole world begins to unravel . . . 'Don't miss this gripping page turner.' She 'A must read.' The Sun www.matched-book.com

On her seventeenth birthday, Cassia meets her Match. Society dictates he is her perfect partner for life. Except he's not. In Cassia's society, Officials decide who people love. How many children they have. Where they work. When they die. But, as Cassia finds herself falling in love with another boy, she is determined to make some choices of her own. And that's when her whole world begins to unravel . . . 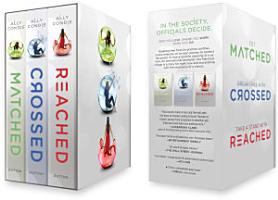 Presents the three volumes of the author's Matched trilogy that follow Cassia's growing dissatisfaction with the Society and her struggle with choosing between Xander and Ky.

Celebrate the 10th anniversary of Ally Condie's multi-million copy bestseller with the deluxe gold edition of this modern dystopian classic! Packed with all-new, exclusive bonus content including: * A never-before-seen map of the Matched trilogy world. * A Decade of Matched: Ally Condie in conversation with bestselling author Soman Chainani * Bonus story: "Green Girl in a Green Dress" * Discussion Guide In the Society, Officials decide. Who you love. Where you work. When you die. Cassia has always trusted the Society's choices. And when her best friend appears on the Matching screen, she is certain he's the one--until she sees another face flash for an instant before the screen fades to black. Now she is faced with impossible choices: between Xander and Ky, between the only life she's ever known and a path no one has dared to follow. Between perfection and the truth. "This futuristic fable of love and free will asks: Can there be freedom without choice? The tale of Cassia's journey from acceptance to rebellion will draw you in and leave you wanting more." --Cassandra Clare, New York Times bestselling author of The Mortal Instruments series and The Infernal Devices trilogy "[A] superb dystopian romance." --Wall Street Journal ★ "A fierce, unforgettable page-turner."--Kirkus, starred review

Seventeen-year-old Cassia sacrifices everything and heads to the Outer Provinces in search of Ky, where she is confronted with shocking revelations about Society and the promise of rebellion.

The thrilling conclusion to the New York Times Bestselling Matched Trilogy! Perfect for fans of 1984, Brave New World, Black Mirror, and The Handmaid’s Tale. Cassia’s journey began with an error, a momentary glitch in the otherwise perfect façade of the Society. After crossing canyons to break free, she waits, silk and paper smuggled against her skin, ready for the final chapter. The wait is over. One young woman has raged against those who threaten to keep away what matters most—family, love, choice. Her revolution is about to explode into full-scale rebellion. As an incurable plague sweeps through the Society, Cassia races to save both the lives and freedom of those she loves. With exquisite prose, the emotionally gripping conclusion to the international–bestselling Matched trilogy returns Cassia, Ky, and Xander to the Society to save the one thing they have been denied for so long, the power to choose.

"An upbeat rom-com filled with Renaissance Faire flower crowns, sword fights, tavern wenches, and an accidentally-in-love romance. Single mother April Parker has lived in the small town of Willow Creek for eighteen years. April is about to become an empty nester, and while she likes her quaint little town, she's decided it's time to move on. She asks her friend Mitch for his help with some home improvements to get her house ready to sell. Mitch Malone is known for being the life of every party, but mostly for the costume he wears to the local Renaissance Faire every summer--a kilt guaranteed to make tavern wenches swoon. He agrees to help April, on one condition: she'll pretend to be his girlfriend at an upcoming family dinner, so that he can avoid the lectures from his relatives about settling down. April reluctantly agrees, but when the dinner somehow turns into a weekend trip, it becomes hard to tell the difference between what's real and what's just for show. But the weekend ends and with it, so does their fake relationship. As summer begins, Faire returns to Willow Creek, and April volunteers for the first time. When Mitch's family shows up unexpectedly, April pretends to be Mitch's girlfriend again...something that doesn't feel so fake anymore. Despite their obvious connection, April insists there's nothing real between them, and a heartbroken Mitch pulls away. April must figure out what she really wants before she loses the kilt-wearing hunk who might just be the love of her life"--

This digital collection includes all three critically acclaimed, award-winning novels from Ally Condie's Matched Trilogy, including Matched, Crossed, and the breathtaking conclusion, Reached. An international bestseller, the Matched Trilogy is a story for right now and storytelling with the resonance of a classic.

In search of a better life, Cassia joins a widespread rebellion against Society, where she is tasked with finding a cure to the threat of survival and must choose between Xander and Ky.

Presents the three volumes of the author's Matched trilogy that follow Cassia's growing dissatisfaction with the Society and her struggle with choosing between Xander and Ky.

"This book left me breathless!" --R. L. Stine, #1 New York Times bestselling author of Goosebumps and Fear Street "Move over, Stranger Things. . . The Darkdeep will pull you into an irresistibly eerie world beyond your wildest dreams--and nightmares." --Melissa de la Cruz, #1 New York Times bestselling author of the Descendants series New York Times bestselling authors Ally Condie and Brendan Reichs team up to co-author this thrilling first book in a darkly suspenseful middle grade series. Everyone in Timbers knows Still Cove is off-limits, with its creepy Beast sightings and equally terrifying legends. But when a bullying incident sends twelve-year-old Nico Holland over a cliff and into Still Cove's icy waters, friends Tyler and Emma--and even Opal Walsh, who usually runs with the popular kids--rush to his rescue . . . and discover a mysterious island hiding in the murky, swirling mists below. Though the island appears uninhabited, the kids can't shake a feeling that something about it is definitely not right. Their suspicions grow when they stumble upon an abandoned houseboat filled with all sorts of curiosities: odd-looking weapons, unnerving portraits, maps to unknown places, and a glass jar containing something completely unidentifiable. And in its lowest depths churns a dark, deep secret. As the group delves deeper into this mysterious new clubhouse, their lives begin to intertwine in weird and dangerous ways. For something ancient has awakened . . . and it can detect not only their wishes and dreams, but also their darkest, most terrible imaginings. Do they have what it takes to face the shadowy secrets lurking within their own hearts? Told from alternating points of view, this pulse-racing tale from bestselling duo Ally Condie and Brendan Reichs is the start of a high-stakes, thrilling series about friendship and believing in yourself--and each other. 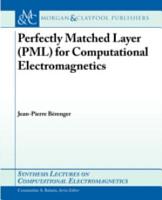 This lecture presents the perfectly matched layer (PML) absorbing boundary condition (ABC) used to simulate free space when solving the Maxwell equations with such finite methods as the finite difference time domain (FDTD) method or the finite element method. The frequency domain and the time domain equations are derived for the different forms of PML media, namely the split PML, the CPML, the NPML, and the uniaxial PML, in the cases of PMLs matched to isotropic, anisotropic, and dispersive media. The implementation of the PML ABC in the FDTD method is presented in detail. Propagation and reflection of waves in the discretized FDTD space are derived and discussed, with a special emphasis on the problem of evanescent waves. The optimization of the PML ABC is addressed in two typical applications of the FDTD method: first, wave-structure interaction problems, and secondly, waveguide problems. Finally, a review of the literature on the application of the PML ABC to other numerical techniques of electromagnetics and to other partial differential equations of physics is provided. In addition, a software package for computing the actual reflection from a FDTD-PML is provided. It is available at http: //www.morganclaypool.com/page/berenger

This volume contains a wealth of results and methodologies applicable to a wide range of problems arising in reaction-diffusion theory. It can be viewed both as a handbook, and as a detailed description of the methodology. The authors present new methods based on matched asymptotic expansions.

Introducing MATCHED, a new sexy standalone romance by USA Today Bestselling Author S. E. Lund. Everyone thinks Jon is in love with India and India is in love with Jon -- everyone except Jon and India. They don't want something as crass as sex to mess up their beautiful relationship as co-owners of a tech business that's on its way to the Forbes 1,000. When India's best friend matches them both with someone chosen using her new dating app, everything changes and they must come to terms with the truth about partnerships and love. WIll their beautiful relationship survive?

Opposites attract when a dating app error pairs free-spirited Rachel with Isaac, a seriously alpha CEO. Their red-hot chemistry leads to a no-strings weekend away, but can their connection last when the real world comes crashing in? Rachel Stephens is back. Finally free of her domineering ex-husband, Rachel is ready to reclaim her fun, spontaneous, outgoing self. But a mix-up at the test run for dating app Power Match leaves her paired with a very unlikely suitor: the app’s biggest funder, CEO Isaac Miller. Rachel has no interest in another super alpha power broker, even if Isaac seems to have walked straight out of her most explicit fantasies. But before she can swipe left, Isaac convinces Rachel to give them a shot…and proves that they’re exhilaratingly compatible in one area: between the sheets. After a lust-fueled weekend in Dublin, Rachel starts to wonder whether she and Isaac should give their matchup a chance. But she’s in for a nasty surprise. The second they arrive back in New York, Rachel and Isaac find themselves on opposite sides of a corporate conflict. And Rachel is faced with an impossible choice: ruin any chance for promotion at her law firm or betray the trust of the one man who just might be her perfect match. Harlequin Dare publishes sexy romances featuring powerful alpha heroes and bold, fearless heroines exploring their deepest fantasies. Four new Harlequin Dare titles are available each month, wherever ebooks are sold!