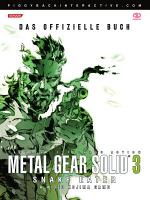 Before they co-created the hit web series Hey Ash, Whatcha Playin'?, Ashly and Anthony Burch were just a brother and sister who shared a weird obsession with Solid Snake and his 3D debut, Metal Gear Solid. And why wouldn't they? Hideo Kojima's 1998 game featured groundbreaking stealth mechanics, a gruff and hunky leading man, a brilliantly claustrophobic setting, tons of cinematic cutscenes, shocking fourth wall breaks, and terrifying bosses. The only problem: The Burches grew up but their all-time favorite video game didn't. After nearly two decades, Metal Gear Solid's once-innovative stealth mechanics seem outdated, the cutscenes have lost some of their action movie punch, and the game's treatment of women is often out of touch. Witness a celebration/takedown of this landmark game with the combination of insight and hilarity that Ashly and Anthony have made their careers on.

This novel goes back to the origins of the game series, retelling in greater detail the story of Solid Snake in the first MGS game. Solid Snake is a special operations agent with the Foxhound special forces unit. Called in to complete the jobs no one else can, Snake uses a combination of espionage, stealth and ruthlessness to achieve his goals - no matter what the cost. Learn more about Snake as he encounters the Metal Gear armour, his lifelong enemy Revolver Ocelot, and the mystery of Shadow Moses Island ...

Big Boss wakes up from a coma after nine years to find himself in a world that has moved on completely. But war never changes. And old enemies from the past are still searching for him, to put an end to his legacy once and for all. You are the legendary soldier, Big Boss, codenamed "Venom Snake". Fight past demons and confront new ones in Hideo Kojima's swansong for the Metal Gear series. Let us guide you on your journey for Hideo Kojima’s final Metal Gear Game: Metal Gear Solid V: The Phantom Pain. Inside this guide you will find: - The ultimate guide to 100% completion: Every mission and side-ops, all secrets and collectibles at your fingertips. - Hi-resolution screenshots and videos to S-Rank every single mission. - Information on the Mother Base management meta-game. - Quality control: Carefully designed to avoid unnecessary story spoilers. - And much much more! Version 1.1 includes: - A full trophy/achievement guide. - Locations of all of the collectibles, such as Blueprints, Wild Animals and more. - A detailed list of every Key Dispatch Mission. - An analysis of every single Side Ops.

The entire Metal Gear Solid saga comes alive in this massive 24-issue collection. Follow Solid Snake as he fights to save the world from destruction at the hands of rogue terrorist groups...

This guide includes the following: - The basics to combat and in-game mechanics. - Complete walkthroughs for each mission incorporating all optional objectives and collectibles. - Strategies to earn you those elusive S-Rank scores for each mission with text and video guides for each. - Collectible locations guide for every XOF Patch and Cassette Tape. - Comprehensive list of secrets and Easter Eggs.