The classic samurai novel about the real exploits of the most famous swordsman. Miyamoto Musashi was the child of an era when Japan was emerging from decades of civil strife. Lured to the great Battle of Sekigahara in 1600 by the hope of becoming a samurai--without really knowing what it meant--he regains consciousness after the battle to find himself lying defeated, dazed and wounded among thousands of the dead and dying. On his way home, he commits a rash act, becomes a fugitive and brings life in his own village to a standstill--until he is captured by a weaponless Zen monk. The lovely Otsu, seeing in Musashi her ideal of manliness, frees him from his tortuous punishment, but he is recaptured and imprisoned. During three years of solitary confinement, he delves into the classics of Japan and China. When he is set free again, he rejects the position of samurai and for the next several years pursues his goal relentlessly, looking neither to left nor to right. Ever so slowly it dawns on him that following the Way of the Sword is not simply a matter of finding a target for his brute strength. Continually striving to perfect his technique, which leads him to a unique style of fighting with two swords simultaneously, he travels far and wide, challenging fighters of many disciplines, taking nature to be his ultimate and severest teacher and undergoing the rigorous training of those who follow the Way. He is supremely successful in his encounters, but in the Art of War he perceives the way of peaceful and prosperous governance and disciplines himself to be a real human being. He becomes a reluctant hero to a host of people whose lives he has touched and been touched by. And, inevitably, he has to pit his skill against the naked blade of his greatest rival. Musashi is a novel in the best tradition of Japanese story telling. It is a living story, subtle and imaginative, teeming with memorable characters, many of them historical. Interweaving themes of unrequited love, misguided revenge, filial piety and absolute dedication to the Way of the Samurai, it depicts vividly a world Westerners know only vaguely. Full of gusto and humor, it has an epic quality and universal appeal. The novel was made into a three-part movie by Director Hiroshi Inagai. For more information, visit the Shopping area

The life of Miyamoto Musashi (1584-1645), Japan's greatest samurai swordsman, is chronicled in this first authoritative, "lively and balanced" ("Library Journal"), English-language biography of the impressive warrior. Included is original artwork by Musashi plus Glossary, map, and Appendices.

Miyamoto Musashi, the legendary samurai, is known throughout the world as a master swordsman, a spiritual seeker, and the author of the classic Book of Five Rings. This graphic novel treatment of his amazing life is both a vivid account of a fascinating period in feudal Japan and a portrait of courageous, iconoclastic samurai who wrestled with philosophical and spiritual ideas that are as relevant today as they were in his time. For Musashi, the way of the martial arts was about mastery of the mind rather than simply technical prowess. Over 350 years after his death, Musashi still intrigues us—and his Book of Five Rings is essential reading for students of all martial arts and those interested in cultivating strategic mind.

Miyamoto Musashi (1584–1645) is the most famous Samurai who ever lived. His magnum opus, the Go-Rin-Sho or Book of Five Rings is a classic that is still read by tens of thousands of people each year—Japanese and foreigners alike. Alex Bennett's groundbreaking new translation of The Book of Five Rings reveals the true meaning of this text for the first time. Like Sun Tzu's The Art of War, Musashi's book offers unique insights, not just for warriors, but for anyone wanting to apply the Zen Buddhist principle of awareness to achieve success in their endeavors. This book sheds new light on Japanese history and on the philosophical meaning of Bushido—the ancient "code of the Japanese warrior." Unlike other translations that are based on incomplete and inaccurate versions of Musashi's work, Bennett's is the first to be based on a careful reconstruction of the long-lost original manuscript. Capturing the subtle nuances of the original Japanese classic, the result is a far more accurate and meaningful English version of The Book of Five Rings text. Richly annotated and with an extensive introduction to Musashi's life, this version includes a collection of his other writings—translated into English for the first time. A respected scholar, as well as a skilled martial artist, Bennett's understanding of Musashi's life and work is unparalleled. This book will be widely read by students of Japanese culture, history, military strategy, and martial arts. It sets a new standard against which all other translations will be measured.

Miyamoto Musashi, who lived in Japan in the fifteenth century, was a renowned samurai warrior. He has become a martial arts icon, known not just as an undefeated dueler, but also as a master of battlefield strategy. Kenji Tokitsu turns a critical eye on Musashi's life and writings, separating fact from fiction, and giving a clear picture of the man behind the myth. Musashi's best-known work, The Book of Five Rings, provides timeless insight into the nature of conflict. Tokitsu translates and provides extensive commentary on that popular work, as well as three other short texts on strategy that were written before it, and a longer, later work entitled "The Way to Be Followed Alone." Tokitsu is a thoughtful and informed guide, putting the historical and philosophical aspects of the text into context, and illuminating the etymological nuances of particular Japanese words and phrases. As a modern martial artist and a scholar, Tokitsu provides a view of Musashi's life and ideas that is accessible and relevant to today's readers and martial arts students. 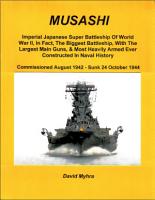 Imperial Japanese super battleship of World War II, the biggest battleship, with the largest main guns & most heavily armed ever constructed in Naval history, and was commissioned in August 1942 and sank with a full compliment of crew on 24 October 1944. Contains before and during sinking photos and information!