The #1 New York Times Bestseller Now featuring a sneak peek at Christina's forthcoming novel The Exiles, coming August 2020. “A lovely novel about the search for family that also happens to illuminate a fascinating and forgotten chapter of America’s history. Beautiful.”—Ann Packer Between 1854 and 1929, so-called orphan trains ran regularly from the cities of the East Coast to the farmlands of the Midwest, carrying thousands of abandoned children whose fates would be determined by pure luck. Would they be adopted by a kind and loving family, or would they face a childhood and adolescence of hard labor and servitude? As a young Irish immigrant, Vivian Daly was one such child, sent by rail from New York City to an uncertain future a world away. Returning east later in life, Vivian leads a quiet, peaceful existence on the coast of Maine, the memories of her upbringing rendered a hazy blur. But in her attic, hidden in trunks, are vestiges of a turbulent past. Seventeen-year-old Molly Ayer knows that a community service position helping an elderly woman clean out her home is the only thing keeping her out of juvenile hall. But as Molly helps Vivian sort through her keepsakes and possessions, she discovers that she and Vivian aren't as different as they appear. A Penobscot Indian who has spent her youth in and out of foster homes, Molly is also an outsider being raised by strangers, and she, too, has unanswered questions about the past. Moving between contemporary Maine and Depression-era Minnesota, Orphan Train is a powerful novel of upheaval and resilience, of second chances, and unexpected friendship. 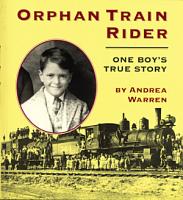 Discusses the placement of over 200,000 orphaned or abandoned children in homes throughout the Midwest from 1854 to 1929 by recounting the story of one boy and his brothers.

This young readers’ edition of Christina Baker Kline’s #1 New York Times bestselling novel Orphan Train follows a twelve-year-old foster girl who forms an unlikely bond with a ninety-one-year-old woman. Adapted and condensed for a young audience, Orphan Train Girl includes an author’s note and archival photos from the orphan train era. This book is especially perfect for mother/daughter reading groups. Molly Ayer has been in foster care since she was eight years old. Most of the time, Molly knows it’s her attitude that’s the problem, but after being shipped from one family to another, she’s had her fair share of adults treating her like an inconvenience. So when Molly’s forced to help an a wealthy elderly woman clean out her attic for community service, Molly is wary. But from the moment they meet, Molly realizes that Vivian isn’t like any of the adults she’s encountered before. Vivian asks Molly questions about her life and actually listens to the answers. Soon Molly sees they have more in common than she thought. Vivian was once an orphan, too—an Irish immigrant to New York City who was put on a so-called "orphan train" to the Midwest with hundreds of other children—and she can understand, better than anyone else, the emotional binds that have been making Molly’s life so hard. Together, they not only clear boxes of past mementos from Vivian’s attic, but forge a path of friendship, forgiveness, and new beginnings.

When they step into the Imagination Station, kids experience an unforgettable journey filled with action-packed adventure. With each book, they’re whisked away with cousins Patrick and Beth to embark on a new journey around the world and back in time. This easy-to-read adventure is number 18 in the successful series that has now sold over 450,000 books in the series. Patrick and Beth arrive on an orphan train, heading west. They befriend an orphan who is falsely accused of being part of a train robbery. No one will adopt the child. Patrick and Beth stay with their new friend until the end of the line. All the while, they search for Eugene, who is missing somewhere in time. 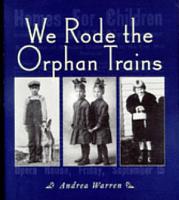 Describes the journey many orphan children took looking for families and homes to call their own.

The true story behind Christina Baker Kline’s bestselling novel is revealed in this “engaging and thoughtful history” of the Children’s Aid Society (Los Angeles Times). A powerful blend of history, biography, and adventure, Orphan Trains fills a grievous gap in the American story. Tracing the evolution of the Children’s Aid Society, this dramatic narrative tells the fascinating tale of one of the most famous—and sometimes infamous—child welfare programs: the orphan trains, which spirited away some two hundred fifty thousand abandoned children into the homes of rural families in the Midwest. In mid-nineteenth-century New York, vagrant children, whether orphans or runaways, filled the streets. The city’s solution for years had been to sweep these children into prisons or almshouses. But a young minister named Charles Loring Brace took a different tack. With the creation of the Children’s Aid Society in 1853, he provided homeless youngsters with shelter, education, and, for many, a new family out west. The family matching process was haphazard, to say the least: at town meetings, farming families took their pick of the orphan train riders. Some children, such as James Brady, who became governor of Alaska, found loving homes, while others, such as Charley Miller, who shot two boys on a train in Wyoming, saw no end to their misery. Complete with extraordinary photographs and deeply moving stories, Orphan Trains gives invaluable insights into a creative genius whose pioneering, if controversial, efforts inform child rescue work today.

From Christina Baker Kline comes a novel about two women: one about to age out of the foster care system, the other 90 years old and carrying both a tremendous secret and a story of a life formed by a part of American history almost entirely forgotten: the Orphan Trains Molly Ayer has one last chance, and she knows it. Close to being kicked out of her foster home -- just months from turning 18 and “aging out” of the system -- Molly should be grateful that her boyfriend found her a community service project: helping an old lady clean out her home. Molly can’t help but think that the 50 hours will be tedious, but at least they’ll keep her out of juvie, and right now that’s all she cares about. Ninety-one-year-old Vivian Daly has lived a quiet life on the coast of Maine for decades. But in her attic, hidden in trunks, are keys to a turbulent past. Molly is about to discover -- as she and Vivian unpack her possessions, and memories -- that Vivian’s story is a piece of America’s tumultuous history now largely forgotten: the tale of a young Irish immigrant, orphaned in New York City and put on a train to the Midwest with hundreds of other orphaned children whose destiny would be determined by luck and chance. As Molly digs deeper, she finds surprising parallels in her own experience as a Penobscot Indian and Vivian’s story -- and Molly realizes that she has the power to help Vivian find answers to mysteries that have haunted her for her entire life. Rich in detail and epic in scope, THE TRAIN RIDER is a powerful novel of upheaval and resilience, of second chances, of unexpected friendships, and of the secrets we carry with us that keep us from finding out who we are.