Search Results for: religion and the human sciences

Proposes a new paradigm for interdisciplinary studies by applying the thought of Bernard Lonergan to define spirituality as the missing link between religion and theology.

Richard Roberts explores the religious consequences of the imposition of managerial modernity upon successive sectors of society.

Religion, Theology and the Human Sciences explores the religious consequences of the so-called 'end of history' and 'triumph of capitalism' as they have impinged upon key institutions of social reproduction in recent times. The book explores the imposition of managerial modernity upon successive sectors of society and shows why many people today feel themselves to be oppressed by systems of management that seem to leave them no option but to conform. Richard Roberts seeks to challenge and outflank such seamless, oppressive modernity, through reconfiguration of the religious and spiritual field.

Ali Zaidi discloses a largely unnoticed dialogue between Muslim and Western social thought on the search for meaning and transcendence in the human sciences. This disclosure is accomplished by a comparative reading of Muslim debates on secular knowledge on the one hand and of Western debates on the putative death of metaphysics in the human sciences on the other hand. The analysis is grounded in dialogical hermeneutics; that is, a hermeneutic approach to texts and cultural traditions that draws upon the work of Hans-Georg Gadamer and upon the insights of inter-religious dialogue. 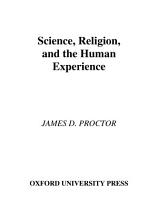 The relationship between science and religion is generally depicted in one of two ways. In one view, they are locked in an inevitable, eternal conflict in which one must choose a side. In the other, they are separate spheres, in which the truth claims of one have little bearing on the other. This collection of provocative essays by leading thinkers offers a new way of looking at this problematic relationship. The authors begin from the premise that both science and religion operate in, yet seek to reach beyond, specific historical, political, ideological, and psychological contexts. How may we understand science and religion as arising from, yet somehow transcending, human experience? Among the scholars who explore this question are Bruno Latour, Hilary Putnam, Jeffrey Burton Russell, Daniel Matt, Michael Ruse, Ronald Numbers, Pascal Boyer, and Alan Wallace. The volume is divided into four sections. The first takes a fresh look at the relationship between science and religion in broad terms: as spheres of knowledge or belief, realms of experience, and sources of authority. The other three sections take on topics that have been focal points of conflict between science and religion: the nature of the cosmos, the origin of life, and the workings of the mind. Ultimately, the authors argue, by seeing science and religion as irrevocably tied to human experience we can move beyond simple either/or definitions of reality and arrive at a more rich and complex view of both science and religion. 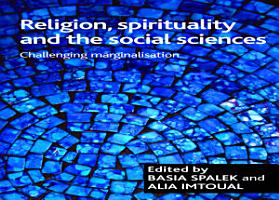 This edited collection addresses important theoretical and methodological issues to explore ways of engaging with religion and spirituality when carrying out social science research.

Prepared in honor of E. Thomas Lawson, the essays in Religion as a Human Capacity offer a broad range of cognitivist theoretical explorations of religion, as well as cutting-edge applications of cognitive and other contemporary theories to religious data.

A great many theorists have argued that the defining feature of modernity is that people no longer believe in spirits, myths, or magic. Jason Ā. Josephson-Storm argues that as broad cultural history goes, this narrative is wrong, as attempts to suppress magic have failed more often than they have succeeded. Even the human sciences have been more enchanted than is commonly supposed. But that raises the question: How did a magical, spiritualist, mesmerized Europe ever convince itself that it was disenchanted? Josephson-Storm traces the history of the myth of disenchantment in the births of philosophy, anthropology, sociology, folklore, psychoanalysis, and religious studies. Ironically, the myth of mythless modernity formed at the very time that Britain, France, and Germany were in the midst of occult and spiritualist revivals. Indeed, Josephson-Storm argues, these disciplines’ founding figures were not only aware of, but profoundly enmeshed in, the occult milieu; and it was specifically in response to this burgeoning culture of spirits and magic that they produced notions of a disenchanted world. By providing a novel history of the human sciences and their connection to esotericism, The Myth of Disenchantment dispatches with most widely held accounts of modernity and its break from the premodern past.

The essays in this volume constitute a portion of the research program being carried out by the International Society for Phenomenology and the Human Sciences. Established as an affiliate society of the World Institute for Ad vanced Phenomenological Research and Learning in 1976, in Arezzo, Italy, by the president of the Institute, Dr Anna-Teresa Tymieniecka, this particular society is devoted to an exploration of the relevance of phenomenological methods and insights for an understanding of the origins and goals of the specialised human sciences. The essays printed in the first part of the book were originally presented at the Second Congress of this society held at Purdue University, West Lafayette, Indiana, 12-14 July 1979. The second part of the volume consists of selected essays from the third convention (the Eleventh International Congress of Phenomenology of the World Phenomen ology Institute) held in Cambridge, Massachusetts in 1981. With the third part of this book we pass into the "Human Rights" issue as treated by the World Phenomenology Institute at the Interamerican Philosophy Congress held in Tallahassee, Florida, also in 1981. The volume opens with a mono graph by Anna-Teresa Tymieniecka on the foundations of ethics in the moral practice within the life-world and the social world shown as clearly distinct. The main ideas of this work had been presented by Tymieniecka as lead lectures to the three conferences giving them a tight research-project con sistency.

Through an absorbing investigation into recent, high-profile scandals involving one of the largest kosher slaughterhouses in the world, located unexpectedly in Postville, Iowa, Aaron S. Gross makes a powerful case for elevating the category of the animal in the study of religion. Major theorists have almost without exception approached religion as a phenomenon that radically marks humans off from other animals, but Gross rejects this paradigm, instead matching religion more closely with the life sciences to better theorize human nature. Gross begins with a detailed account of the scandals at Agriprocessors and their significance for the American and international Jewish community. He argues that without a proper theorization of "animals and religion," we cannot fully understand religiously and ethically motivated diets and how and why the events at Agriprocessors took place. Subsequent chapters recognize the significance of animals to the study of religion in the work of Ernst Cassirer, Emile Durkheim, Mircea Eliade, Jonathan Z. Smith, and Jacques Derrida and the value of indigenous peoples' understanding of animals to the study of religion in our daily lives. Gross concludes by extending the Agribusiness scandal to the activities at slaughterhouses of all kinds, calling attention to the religiosity informing the regulation of "secular" slaughterhouses and its implications for our relationship with and self-imagination through animals.

Humans are unique in their ability to reflect on themselves. Recently a number of scholars have pointed out that human self-conceptions have a history. Ideas of human nature in the West have always been shaped by the interplay of philosophy, theology, science, and technology. The fast pace of developments in the latter two spheres (neuroscience, genetics, artificial intelligence, biomedical engineering) call for fresh reflections on what it means, now, to be human, and for theological and ethical judgments on how we might shape our own destiny in the future. The leading scholars in this book offer fresh contributions to the lively quest for an account of ourselves that does justice to current developments in theology, science, technology, and philosophy.

Psychology, Religion, and Spirituality provides readers with a critical overview of what psychology tells us about religion and spirituality. It is concise without being simplistic, and the first such broad overview to be published for some years. Fraser Watts recognizes that 'religion' is complex and multi-faceted, taking different forms in different people and contexts. The book presents a broad view of psychology; whatever kind of psychology you are interested in, you will find it covered here, from biological to social, and from experimental to psychoanalytic. It focuses particularly on the varied concepts that psychologists have employed to make sense of religion and subjects them to critical examination. The book is also concerned with practical applications, helping those engaged in religious ministry. It will be of interest to undergraduates and general readers, as well as specialists in religious studies, psychology, and philosophy of religion.

Explores the relationship between religious studies and theology and the place of each in the modern, secular university.

This book celebrates the fortieth anniversary of the UK’s Science and Religion Forum by bringing together leading scientific and theological thinkers to reflect on the last four decades of the science-theology conversation and to chart new directions for its future. Through an engagement with some of the most recent developments in the sciences as diverse as quantum holism, theories of emergence, technology studies, and the sociology of religion, the book explores a broad range of pressing theological questions, such as: What is religion? What does it mean to be human? How can theology best respond to the ecological crisis? In addressing these questions, and many more, the contributors to this volume forge innovative models for the interrelation of science and religion, making this book a timely and valuable resource for all those interested in the future of the science-theology conversation.