Search Results for: the architecture of paris 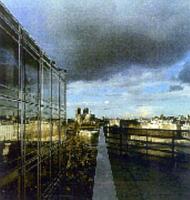 Looks at the work of four nineteenth century French architects, including libraries, schools, a cathedral, and public buildings

a reference guide to the most significant architectural structures in France. 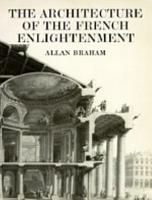 Allan Braham's comprehensive treatment of this brilliant and complex period introduces the reader to the major buildings, architects, and architectural patrons of the day. At the same time, it explores the broader determinants of architectural production: the rapid economic expansion of Paris and the main provincial centers and the increasing demand for improved public amenities--theaters, schools, markets, and hospitals. This generously illustrated book provides a vivid commentary on society and manners in pre-Revolutionary France.

In 1910 John Merven Carrère, a Paris-trained American architect, wrote, “Learning from Paris made Washington outstanding among American cities.” The five essays in Paris on the Potomac explore aspects of this influence on the artistic and architectural environment of Washington, D.C., which continued long after the well-known contributions of Peter Charles L’Enfant, the transplanted French military officer who designed the city’s plan. Isabelle Gournay’s introductory essay provides an overview and examines the context and issues involved in three distinct periods of French influence: the classical and Enlightenment principles that prevailed from the 1790s through the 1820s, the Second Empire style of the 1850s through the 1870s, and the Beaux-Arts movement of the early twentieth century. William C. Allen and Thomas P. Somma present two case studies: Allen on the influence of French architecture, especially the Halle aux Blés, on Thomas Jefferson’s vision of the U.S. Capitol; and Somma on David d’Angers’s busts of George Washington and the Marquis de Lafayette. Liana Paredes offers a richly detailed examination of French-inspired interior decoration in the homes of Washington’s elite in the late nineteenth and early twentieth centuries. Cynthia R. Field concludes the volume with a consideration of the influence of Paris on city planning in Washington, D.C., including the efforts of the McMillan Commission and the later development of the Federal Triangle complex. The essays in this collection, the latest addition to the series Perspectives on the Art and Architectural History of the United States Capitol, originated in a conference held by the U.S. Capitol Historical Society in 2002 at the French Embassy’s Maison Française. 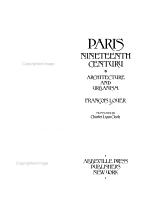 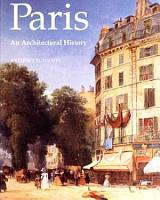 In this extensively illustrated work, one of Paris' leading historians links the beauty of the city to its harmonious architecture, the product of a powerful tradition of classical design running from the Renaissance through the 20th century. 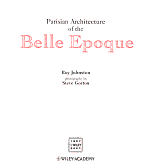 Turn of the century Paris is often referred to as the belle époque, a golden age of affluence and artistic creativity before the turmoil of the First World War. This was the Paris of artists such as Bonnard, Rodin, Seurat and Vuillard, as well as writers and musicians such as Debussy, Zola and Maupassant. The Eiffel Tower had just been built and the Moulin Rouge was in its heyday - Paris was the cosmopolitan capital of pleasure and culture. The architecture of the period, however, has generally been neglected known only for the Art Nouveau designs of Guimard's Metro entrances and restaurants such as Maxim's. This book, based on a thorough survey of Parisian buildings of the era, connects the medievalism of Viollet-le-Duc, the classical tradition of the Ecole des Beaux-Arts and early developments in metal and concrete construction with modern pioneers like Perret, de Baudot and Sauvage. Including the exuberant designs by architects working in the 'Ritz style', as well as the work of a multitude of architects whose names are at present unknown, Parisian Architecture of the Belle Epoque is a truly comprehensive and visually sumptuous study of this under exposed period of architecture.

Features photographs, history, and anecdotes of one thousand Paris buildings, and includes keyed maps of each building's neighborhood. 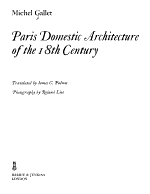