Search Results for: the breakthrough 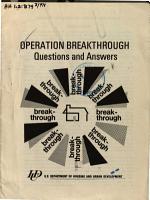 Between the 1960s and the 1980s, the human rights movement achieved unprecedented global prominence. Amnesty International attained striking visibility with its Campaign Against Torture; Soviet dissidents attracted a worldwide audience for their heroism in facing down a totalitarian state; the Helsinki Accords were signed, incorporating a "third basket" of human rights principles; and the Carter administration formally gave the United States a human rights policy. The Breakthrough is the first collection to examine this decisive era as a whole, tracing key developments in both Western and non-Western engagement with human rights and placing new emphasis on the role of human rights in the international history of the past century. Bringing together original essays from some of the field's leading scholars, this volume not only explores the transnational histories of international and nongovernmental human rights organizations but also analyzes the complex interplay between gender, sociology, and ideology in the making of human rights politics at the local level. Detailed case studies illuminate how a number of local movements—from the 1975 World Congress of Women in East Berlin, to antiapartheid activism in Britain, to protests in Latin America—affected international human rights discourse in the era as well as the ways these moments continue to influence current understanding of human rights history and advocacy. The global south—an area not usually treated as a scene of human rights politics—is also spotlighted in groundbreaking chapters on Biafran, South American, and Indonesian developments. In recovering the remarkable presence of global human rights talk and practice in the 1970s, The Breakthrough brings this pivotal decade to the forefront of contemporary scholarly debate. Contributors: Carl J. Bon Tempo, Gunter Dehnert, Celia Donert, Lasse Heerten, Patrick William Kelly, Benjamin Nathans, Ned Richardson-Little, Daniel Sargent, Brad Simpson, Lynsay Skiba, Simon Stevens.

Follow along as this New York Times bestselling author details the astonishing scientific discovery of the code to unleashing the human immune system to fight in this "captivating and heartbreaking" book (The Wall Street Journal). For decades, scientists have puzzled over one of medicine's most confounding mysteries: Why doesn't our immune system recognize and fight cancer the way it does other diseases, like the common cold? As it turns out, the answer to that question can be traced to a series of tricks that cancer has developed to turn off normal immune responses -- tricks that scientists have only recently discovered and learned to defeat. The result is what many are calling cancer's "penicillin moment," a revolutionary discovery in our understanding of cancer and how to beat it. In The Breakthrough, New York Times bestselling author of The Good Nurse Charles Graeber guides readers through the revolutionary scientific research bringing immunotherapy out of the realm of the miraculous and into the forefront of twenty-first-century medical science. As advances in the fields of cancer research and the human immune system continue to fuel a therapeutic arms race among biotech and pharmaceutical research centers around the world, the next step -- harnessing the wealth of new information to create modern and more effective patient therapies -- is unfolding at an unprecedented pace, rapidly redefining our relationship with this all-too-human disease. Groundbreaking, riveting, and expertly told, The Breakthrough is the story of the game-changing scientific discoveries that unleash our natural ability to recognize and defeat cancer, as told through the experiences of the patients, physicians, and cancer immunotherapy researchers who are on the front lines. This is the incredible true story of the race to find a cure, a dispatch from the life-changing world of modern oncological science, and a brave new chapter in medical history.

Boone Drake, the youngest bureau chief in Chicago Police history, has to choose between being with his wife, who desperately needs him, or pursuing a human trafficking ring to China.

Dispatch the maimed, the old, the weak, destroy the very world itself, for what is the point of life if the promise of fulfilment lies elsewhere? On the windswept coast of rural Suffolk, a deranged scientist attempts to extract the essence of life itself. Penguin Modern: fifty new books celebrating the pioneering spirit of the iconic Penguin Modern Classics series, with each one offering a concentrated hit of its contemporary, international flavour. Here are authors ranging from Kathy Acker to James Baldwin, Truman Capote to Stanislaw Lem and George Orwell to Shirley Jackson; essays radical and inspiring; poems moving and disturbing; stories surreal and fabulous; taking us from the deep South to modern Japan, New York's underground scene to the farthest reaches of outer space.

Relates the story of the electronic device that has revolutionized modern communications and technology, detailing the behind-the-scenes maneuvering and experimentation that led to its creation

CHRISTIAN INSPIRATIONAL FICTION Book 20 of 24 by an award winning & USA Today Bestselling Author When his family's preference clashes with his divine purpose, with a single choice, will his next move propel him backward or forward? Yohanna Felix's family worked in a Kentucky coal mine and prospered until the mines got shut down for its high environmental impact. Their family's fortunes dwindled to what they could no longer survive on and they were forced to choose a new path, or stay working in the mines while their health suffered as a result. But the visit of an elderly Christian missionary to his hometown, and a simple prayer with her, changed his vision—and complicated his options. He stood between the choice of God's blank check for a new, yet-unseen life, and towing the line of his family's expectation of finding work in another mine and possibly falling ill too. Out of options and torn between both competing demands, will he tow the family line and stick with coal mining, or will Yohanna accept God's daring open door, leaping toward what could be an unprecedented breakthrough? The Breakthrough (The Excellence Club #2) is Book 20 of 24 in Author Joy Ohagwu's combined Christian Inspirational Fiction catalogue of the After Series, the New Beginnings Series, and the Excellence Club -- All Christian Inspirational Fiction. Enjoy all Twenty-Four books Today!

The Remarkable discoveries about what drives and sustains successful women leaders. Based on five years of proprietary research, How Remarkable Women Lead speaks to you as no other book has, with its hopeful outlook and unique ideas about success. It's the new "right stuff" of leadership, raising provocative issues such as whether feminine leadership traits (for women and men) are better suited for our fast-changing, hyper-competitive, and increasingly complex world. The authors, McKinsey & Company consultants Joanna Barsh and Susie Cranston, establish the links between joy, happiness, and distinctive performance with the groundbreaking model of Centered Leadership. The book's personal stories and related insights show you the magic that happens when you put the five elements of Centered Leadership–meaning, framing, connecting, engaging, and energizing–to work. They include: • How Alondra de la Parra built on her strengths and passions to infuse her life with meaning and make her way in the male-dominated world of orchestra conducting • How Andrea Jung, the CEO of Avon, avoided a downward spiral when the company turned down by "firing herself" on Friday and re-emerging on Monday as the "new" turnaround CEO • How Ruth Porat's sponsors at Morgan Stanley not only helped her grow but were also her ballast for coping with difficult personal and professional times •How Eileen Naughton recovered after losing her dream job, landing on her feet at Google and open to a new leadership opportunity • How Julie Coates of Woolworth's Australia makes energy key to her professional success, with reserves for her "second shift" as wife and mother How Remarkable Women Lead is both profoundly moving and actionable. Woman or man, you'll find yourself in its pages and emerge with a practical plan for breaking through at both work and in life.