Search Results for: the ragamuffin gospel

Are you bedraggled, beat-up, burnt-out? Most of us believe in God’s grace—in theory. But somehow we can’t seem to apply it in our daily lives. We continue to see Him as a small-minded bookkeeper, tallying our failures and successes on a score sheet. Yet God gives us His grace, willingly, no matter what we’ve done. We come to Him as ragamuffins—dirty, bedraggled, and beat-up. And when we sit at His feet, He smiles upon us, the chosen objects of His “furious love.” Brennan Manning’s now-classic meditation on grace and what it takes to access it—simple honesty—has changed thousands of lives. Now with a Ragamuffin’s thirty-day spiritual journey guide, it will change yours, too. Includes a 30-Day Spiritual Journey Guide! “Brennan Manning does a masterful job of blowing the dust off of shop-worn theology and allowing God’s grace to do what only God’s grace can do—amaze.” -Max Lucado, Bestselling author of The Gift for All People 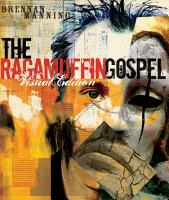 Manning's original bestselling message about God's love comes to life through the provocative photographs, illustrations, and other attractive images throughout this visual book.

In his sequel to The Ragamuffin Gospel bestselling author Brennan Manning shows how true and radical trust in God can transform our lives. Manning, beloved author and spiritual teacher, shows us how trust in God can transform our lives and open us up to deeper experiences of grace and love. In Ruthless Trust, he turns his focus from furious love to radical trust, revealing the ways in which trust renews our faith and help us grow.

Undertakes the impossible task of explaining the two very different sides of the Son of God--his explosive power and his incredible tenderness--and calls us to "adopt the astonishing life of a committed disciple."

It has been over twenty years since the publication of The Ragamuffin Gospel, a book many claim as the shattering of God’s grace into their lives. Since that time, Brennan Manning has been dazzingly faithful in preaching and writing variations on that singular theme – “Yes, Abba is very fond of you!” But today the crowds are gone and the lights are dim, the patches on his knees have faded. If he ever was a ragamuffin, truly it is now. In this his final book, Brennan roves back his past, honoring the lives of the people closest to him, family and friends who’ve known the saint and the sinner, the boy and the man. Far from some chronological timeline, these memories are witness to the truth of life by one who has lived it – All Is Grace.

From the inspirational author of The Ragamuffin Gospel comes a powerful contemporary retelling of the Parable of the Prodigal Son. Jack Chisholm is “the people’s pastor.” He leads a devoted and growing megachurch, has several best-selling books, and a memorable slogan, “We have got to do better.” Jack knows how to preach, and he understands how to chastise people into performing. What he doesn’t know is anything about grace. This year, when it comes time for the Christmas sermon, the congregation at Grace Cathedral will look to the pulpit, and Jack will not be there. Of course, they will have seen plenty of him already—on the news. After an evening of debauchery that leads to an affair with his beautiful assistant, Jack Chisholm finds himself deserted with chilling swiftness. The church elders remove him from his own pulpit. His publisher withholds the royalties from his books. Worst of all, his wife disappears with their eight-year-old daughter. But just as Jack is hitting bottom, hopeless and penniless, drinking his way to oblivion, who should appear but his long-estranged father, imploring his prodigal son: “Come home.” A true companion piece to The Ragamuffin Gospel, The Prodigal illustrates the power of grace through the story of a broken man who finally saw Jesus not because he preached his greatest sermon or wrote his most powerful book, but because he failed miserably. Jack Chisholm lost everything—his church, his family, his respect, and his old way of believing—but he found grace. It’s the same grace that Brennan Manning devoted his life to sharing: profound in nature and coming from a God who loves us just as we are, and not as we should be. “A wonderfully written story that is as entertaining as it is thought provoking.” —Publishers Weekly, starred review “. . . the consummate final tale. What they have created is the Ragamuffin at his best, full of hope, full of love, and finally, full of belief in the goodness of God.” —Phyllis Tickle, founding editor, Religion Department, Publishers Weekly “Brennan Manning’s last work continues the powerful message of grace and forgiveness that has transformed so many lives. The Prodigal will transform you too.” —Mark Batterson, New York Times best-selling author of The Circle Maker