Search Results for: the raven 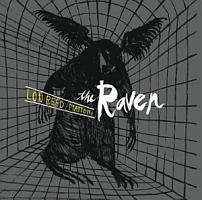 Back in 2003, Lou Reed paid tribute to poet Edgar Allan Poe with his sprawling album, The Raven. This gorgeous book of art and poetry, made in collaboration with Italian illustrator Lorenzo Mattotti, shares its title with that album and further explores Reed’s fascination with Poe’s work. Reed’s poetically streetwise sensibility and style works in surprising harmony with Poe’s dark chronicles of terror and despair, just as Mattotti’s vivid, abstracted and enigmatic paintings perfectly complement Reed’s haunting, contemporary interpretation of Poe’s vision.

...Quoth the Raven, ""Nevermore."" ""The Raven"" is a classic narrative poem by American writer Edgar Allan Poe. First published in January 1845, the poem is often noted for its musicality, stylized language, and supernatural atmosphere. It tells of a talking raven's mysterious visit to a distraught lover, tracing the man's slow fall into madness. The lover, often identified as being a student, is lamenting the loss of his love, Lenore. Sitting on a bust of Pallas, the raven seems to further instigate his distress with its constant repetition of the word ""Nevermore."" The poem makes use of a number of folk, mythological, religious, and classical references. Poe claimed to have written the poem very logically and methodically, intending to create a poem that would appeal to both critical and popular tastes, as he explained in his 1846 follow-up essay, ""The Philosophy of Composition."" The poem was inspired in part by a talking raven in the novel Barnaby Rudge: A Tale of the Riots of 'Eighty by Dickens. 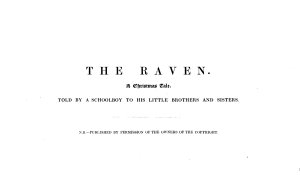 Francisco Flynn is an officer in Land Management in the Mojave Desert, and he wouldn't have it any other way. The son of an Irish immigrant railroad man and a half-Mexican, half-Paiute mother, he lives in the caboose that his father brought up to a hilltop when the railroad stopped running there. Frank loves the desert and the animals that live there. He loathes the wealthy hunters who hire Indians to lead them to where they can shoot Bighorn rams and take their heads to hang as trophies on the walls of their fancy studies. Over the years, Frank has come upon dead bodies---the remains of people who got lost and ran out of water, their corpses drying into mummies in the desert heat. But now he finds a dead man who has only recently lost his life, and it looks very much like he's been murdered. His shoes are gone, he's shirtless, and there is no canteen anywhere in sight. A day or so later, Frank hears word of a trio of bikers who have blown into town looking for a missing comrade. They pick fights in the local bar and don't hesitate to kill when it suits them. Frank is certain that the dead man he found is connected to them, and that many people could be endangered, including the woman reporter he has learned to love. Frank will do anything to rid "his" desert of the bikers who are spreading danger and hate, including putting his own life on the line. With Shadow of the Raven, David Sundstrand adds a shining new voice to Southwestern crime fiction.

Enchant readers with this hi-lo book that puts a modern spin on the classic tale by Edgar Allan Poe: The Raven. Heath decides that moving across country is the pits. He misses his best friend, Lenore. Their "new" house is old and creepy. And a weird raven who seems to be saying "Nevermore" is constantly sitting outside his bedroom window. Will Heath be able to adapt to his new life? This short, 32-page chapter book will appeal to both avid and reluctant readers who enjoy suspenseful, spooky stories.

A portrait of Houston's diverse careers that sheds light upon his heroism, romanticism, and contributions to the Republic of Texas