Search Results for: the time of my life

From an early age, Bill Medley had a passion for music. School glee club and amateur singing contests soon gave way to the albums of Ray Charles and Little Richard. That raw R&B influence would profoundly shape Medley's musical future. As the pioneering “blue-eyed soul” group the Righteous Brothers, Bill Medley and late partner Bobby Hatfield sang such huge hits as “(You're My) Soul and Inspiration,” “Unchained Melody,” and “You've Lost That Lovin' Feelin',” the latter recognized by BMI as the most-played song of the twentieth century. Medley's duet with Jennifer Warnes for the Dirty Dancing soundtrack, “(I've Had) the Time of My Life,” became a worldwide No. 1 single on its way to winning an Oscar, a Grammy, and a Golden Globe. But Medley's story isn't just about the hits and the awards. It's about an immensely talented man who reached the pinnacle of fame, success, and excess, until the shocking murder of his wife, Karen. In time, this tragedy eventually helped him renew his commitment to both faith and family.

In an entertaining memoir that spans some of the major events of the twentieth century, the Pulitzer Prize-winning journalist chronicles his forty-five year career at The New York Times, from his youth in Nazi Germany through World War II to the Cold War, the Space Race, and beyond. 25,000 first printing.

"Some Pow'r did us the giftie grant/ To see oursels as others can't." With that play on Burns' famous line as a preface, Willard Van Orman Quine sets out to spin the yarn of his life so far. And it is a gift indeed to see one of the world's most famous philosophers as no one else has seen him before. To catch an intimate glimpse of his seminal and controversial theories of philosophy, logic, and language as they evolved, and to hear his warm and often amusing comments on famous contemporary philosophers. From his beginnings in Akron, Ohio in the early 1900s, Quine takes us on a tour of over 100 countries over three-quarters of a century, including close observations of the Depression and two world wars. Far from a philosophical tract, it is an ebullient, folksy account of a richly varied and rounded life. When he does dip into philosophy, it is generally of the armchair sort, and laced with a gentle good humor: "There is that which one wants to do for the glory of having done it, and there is that which one wants to do for the joy of doing it. One can want to be a scientist because he wants to see himself as a Darwin or an Einstein, and one can want to be a scientist because he is curious about what makes things tick .... In normal cases the two kinds of motivation are in time brought to terms .... In me the glory motive lingered ...... In this book, Quine approaches the details of his life the way he has always approached them with a sharp sense of interest, adventure and fun. And he has a skill for picking a word that is just off-center enough to pull an ordinary event out of the humdrum of daily life and evoke its personal meaning. The result is a book of memories that is utterlymesmerizing. Willard Van Orman Quine is the author of numerous books, including "Word and Object, "published by The MIT Press in 1960. A Bradford Book.

And there are stories of some of the most familiar names in Australia's cultural life - Ken Horler, John Gaden, Richard Wherrett, Bruce Beresford, Jacki Weaver, Robyn Nevin, Bill Hunter, Judy Davis, Colin Friels, Barrie Kosky and many others." "The Bells are arguably Australia's first theatrical family. John Bell and Anna Volska enjoy exciting and demanding lives in theatre and their daughters, Lucy, an actor, and Hilary, a playwright, are now forging their own successes. 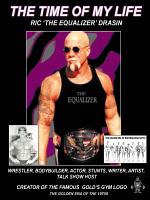 Ric “The Equalizer” Drasin is a former champion bodybuilder and professional wrestler from the golden era whose career excelled inside and outside the ring. Ric was trained by legend Mae Young in 1965 and made his debut at the Grand Olympic Auditorium. He rose to claim many championships and become revered by others in the sport. In “The Time of My Life,” Drasin tells the tale of his successes -- both personal and professional -- with great wisdom and wit. He offers insights about the evolving nature of the sport and intriguing anecdotes of encounters with stars in the business. Throughout his career, Drasin has found countless outlets for his personal brand and expertise in fitness, nutrition, wrestling and bodybuilding. He trained with Arnold Schwarzenegger and designed the iconic Gold’s Gym and World Gym logos. He played the Demi-Hulk alongside Lou Ferrigno and even designed a fitness clothing line. Drasin expounds on the mental toughness, heart and dedication required to truly excel in this art, as well as the applicability of a bodybuilder’s mentality to parenting and other aspects of life. At 71, Ric still stays in excellent shape and trains seven days a week. He has his own show, “Ric’s Corner,” with an ever-growing viewership of over 25 million, and regularly contributes to The Huffington Post. He is still accustomed to beating the odds, as he recently survived pneumonia and congestive heart failure and quickly recovered. Ric is an icon and a motivator to all of his followers in life and on his show. He inspires people to gain self-confidence and go beyond where they ever thought they could go.