This series of aphorisms, put into the mouth of Zarathustra, contains the kernel of Nietzche's original thought. In it he states that "God is dead" and that Christianity is decadent and leads mankind into a slave morality concerned with the next life rather than this.

Presents the author's ideas about the problem of living a fulfilling life in a meaningless world. 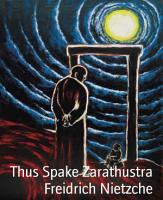 Thus Spake Zarathustra) is a philosophical novel by German philosopher Friedrich Nietzsche. The book chronicles the fictitious travels and speeches of Zarathustra. Zarathustra's namesake was the Persian founder of Zoroastrianism, usually known in English as Zoroaster. Nietzsche is clearly portraying a "new" or "different" Zarathustra, one who turns traditional morality on its head. He goes on to characterize "what the name of Zarathustra means in my mouth, the mouth of the first immoralist:" The book embodies a number of innovative poetical and rhetorical methods of expression. It serves as a parallel and supplement to the various philosophical ideas present in Nietzsche's body of work. He has, however, said that "among my writings my Zarathustra stands to my mind by itself." Emphasizing its centrality and its status as his magnum opus. Since many of the book's ideas are also present in his other works, Zarathustra is seen to have served as a precursor to his later philosophical thought. With the book, Nietzsche embraced a distinct aesthetic assiduity. He later reformulated many of his ideas, in Beyond Good and Evil and various other writings that he composed thereafter. He continued to emphasize his philosophical concerns; generally, his intention was to show an alternative to repressive moral codes and to avert "nihilism" in all of its varied forms. While Nietzsche injects myriad ideas into the book, a few recurring themes stand out. The overman (Übermensch), a self-mastered individual who has achieved his full power, is an almost omnipresent idea in Thus Spoke Zarathustra. Man as a race is merely a bridge between animals and the overman. Nietzsche also makes a point that the overman is not an end result for a person, but more the journey toward self-mastery. The eternal recurrence, found elsewhere in Nietzsche's writing, is also mentioned. "Eternal recurrence" is the possibility that all events in one's life will happen again and again, infinitely. The embrace of all of life's horrors and pleasures alike shows a deference and acceptance of fate, or Amor Fati. The love and acceptance of one's path in life is a defining characteristic of the overman. Faced with the knowledge that he would repeat every action that he has taken, an overman would be elated as he has no regrets and loves life. Opting to change any decision or event in one's life would indicate the presence of resentment or fear; contradistinctly the overman is characterized by courage and a Dionysian spirit. The will to power is the fundamental component of human nature. Everything we do is an expression of the will to power. The will to power is a psychological analysis of all human action and is accentuated by self-overcoming and self-enhancement. Contrasted with living for procreation, pleasure, or happiness, the will to power is the summary of all man's struggle against his surrounding environment as well as his reason for living in it.

Thus Spoke Zarathustra: A Book for All and None is a philosophical novel by German philosopher Friedrich Nietzsche, composed in four parts between 1883 and 1885 and published between 1883 and 1891. Much of the work deals with ideas such as the "eternal recurrence of the same", the parable on the "death of God", and the "prophecy" of the Übermensch, which were first introduced in The Gay Science.

Friedrich Nietzsche: Thus Spoke Zarathustra. A Book for All and None Also sprach Zarathustra: Ein Buch für Alle und Keinen. Composed in four parts between 1883 and 1885 and published between 1883 and 1891. Translated by Thomas Common, T.N. Foulis, Edinbugh and London, 1909. Minion Pro, 11 pt.

'Enigmatic, vatic, emphatic, passionate . . . Nietzsche's works together make a unique statement in the literature of European ideas' A. C. Grayling Nietzsche was one of the most revolutionary thinkers in Western philosophy, and Thus Spoke Zarathustra remains his most influential work. It describes how the ancient Persian prophet Zarathustra descends from his solitude in the mountains to tell the world that God is dead and that the Superman, the human embodiment of divinity, is his successor. With blazing intensity, Nietzsche argues that the meaning of existence is not to be found in religious pieties or meek submission, but in an all-powerful life force: passionate, chaotic and free. Translated with an introduction by R. J. HOLLINGDALE

God Is Dead“I am a forest, and a night of dark trees: but he who is not afraid of my darkness, will find banks full of roses under my cypresses.” - Friedrich Nietzsche, Thus Spake Zarathustra Zarathustra in Thus Spake Zarathustra is not the Persian founder of Zoroastrianism, he is just a means to Friedrich Nietzsche’s end. Through Zarathustra, Nietzsche tries to define his own philosophy attacking the Christian values of good and evil and predicting the rise of a new man, the superman, a self-mastered, self-cultivating, self-directed and self-overcoming individual.

Nietzsche regarded 'Thus Spoke Zarathustra' as his most important work, and his story of the wandering Zarathustra has had enormous influence on subsequent culture. Nietzsche uses a mixture of homilies, parables, epigrams and dreams to introduce some of his most striking doctrines, including the Overman, nihilism, and the eternal return of the same. This edition offers a new translation by Adrian Del Caro which restores the original versification of Nietzsche's text and captures its poetic brilliance. Robert Pippin's introduction discusses many of the most important interpretative issues raised by the work, including who is Zarathustra and what kind of 'hero' is he and what is the philosophical significance of the work's literary form? The volume will appeal to all readers interested in one of the most original and inventive works of modern philosophy.

The first comprehensive interpretation of Nietzsche's Thus Spoke Zarathustra--an important and difficult text and the only book Nietzsche ever wrote with characters, events, setting, and a plot. Laurence Lampert's chapter-by-chapter commentary on Nietzsche's magnum opus clarifies not only Zarathustra's narrative structure but also the development of Nietzsche's thinking as a whole. "An impressive piece of scholarship. Insofar as it solves the riddle of Zarathustra in an unprecedented fashion, this study serves as an invaluable resource for all serious students of Nietzsche's philosophy. Lampert's persuasive and thorough interpretation is bound to spark a revival of interest in Zarathustra and raise the standards of Nietzsche scholarship in general."--Daniel W. Conway, Review of Metaphysics "A book of scholarship, filled with passion and concern for its text."--Tracy B. Strong, Review of Politics "This is the first genuine textual commentary on Zarathustra in English, and therewith a genuine reader's guide. It makes a significant and original contribution to its field."--Werner J. Dannhauser, Cornell University "This is a very valuable and carefully wrought study of a very complex and subtle poetic-philosophical work that provides access to Nietzsche's style of presenting his thought, as well as to his passionately affirmed values. Lampert's commentary and analysis of Zarathustra is so thorough and detailed. . . that it is the most useful English-language companion to Nietzsche's 'edifying' and intriguing work."--Choice Selected as one of Choice's outstanding academic books for 1988

In his preface to Ecce Homo, Friedrich Nietzsche says this: “With [Thus Spoke Zarathustra] I have given mankind the greatest present that has ever been made to it so far. This book, with a voice bridging centuries, is not only the highest book there is, the book that is truly characterized by the air of the heights—the whole fact of man lies beneath it at a tremendous distance—it is also the deepest, born out of the innermost wealth of truth, an inexhaustible well to which no pail descends without coming up again filled with gold and goodness.” Perhaps only a contemporary mystic like Osho could truly understand what Nietzsche meant by this statement. In Love with Life shares Osho’s understanding of both Nietzsche the man and of his seminal work, with extraordinary clarity and relevance to readers in the 21st century. Ten chapters have been selected from a series of 43 talks given by Osho, first published as two volumes: Zarathustra: A God that Can Dance, and Zarathustra: The Laughing Prophet. Here, Nietzsche is rescued from any remaining taint brought on by the Nazi misunderstanding and appropriation of his work, and we also learn much about the mysterious and revolutionary Persian mystic Zarathustra (Zoroaster), whom Nietzsche chose as a spokesperson. The result is an enchanting journey through a world where life is celebrated, not renounced, and where timeless truths prevail over the lies and distortions that continue to cripple our efforts to become healthy and whole.

Thus Spoke Zarathustra is a philosophical novel by German philosopher Friedrich Nietzsche, published in four parts between 1883 and 1891. As one of the most influential works in modern nihilism, the book follows the life, speeches, and travels of Zarathustra, the originator of Zoroastrianism. Thus Spoke Zarathustra argues man should seek to perfect himself during his life on earth, surpassing societal standards of morality and goodness. The ideal is - man transforming himself into the "Übermensch," a more evolved, superhuman-like state of being. Thus Spoke Zarathustra argues every man should follow his own path not dictated by societal conventions. This work is fundamental in guiding existentialist thought and the study of modern philosophy.

Thus Spoke Zarathustra, by Friedrich Nietzsche, is part of theBarnes & Noble Classics series, which offers quality editions at affordable prices to the student and the general reader, including new scholarship, thoughtful design, and pages of carefully crafted extras. Here are some of the remarkable features of Barnes & Noble Classics: New introductions commissioned from today''s top writers and scholars Biographies of the authors Chronologies of contemporary historical, biographical, and cultural events Footnotes and endnotes Selective discussions of imitations, parodies, poems, books, plays, paintings, operas, statuary, and films inspired by the work Comments by other famous authors Study questions to challenge the reader''s viewpoints and expectations Bibliographies for further reading Indices & Glossaries, when appropriate All editions are beautifully designed and are printed to superior specifications; some include illustrations of historical interest. Barnes & Noble Classics pulls together a constellation of influences--biographical, historical, and literary--to enrich each reader''s understanding of these enduring works. Considered by many to be the most important philosopher of modern times, Friedrich Nietzsche influenced twentieth-century ideas and culture more than almost any other thinker. His best-known book, Thus Spoke Zarathustra--published in four parts in the last two decades of the nineteenth century--is also his masterpiece, and represents the fullest expression of his ideas up to that time. A unique combination of biblical oratory and playfulness, Thus Spoke Zarathustra chronicles the wanderings and teachings of the prophet Zarathustra, who descends from his mountain retreat to awaken the world to its new salvation. Do not accept, he counsels, what almost two thousand years of history have taught you to call evil. The Greeks knew better: Goodness for them was nobility, pride, and victory, not the Christian virtues of humility, meekness, poverty, and altruism. The existence of the human race is justified only by the exceptional among us--the "superman," whose self-mastery and strong "will to power" frees him from the common prejudices and assumptions of the day. These and other concepts in Zarathustra were later perverted by Nazi propagandists, but Nietzsche, a despiser of mass movements both political and religious, did not ask his readers for faith and obedience, but rather for critical reflection, courage, and independence. Kathleen M. Higgins and Robert C. Solomon are both professors of philosophy at the University Texas at Austin. Together, they have written What Nietzsche Really Said and A Short History of Philosophy and co-edited Reading Nietzsche.

Walter Kaufmann's celebrated translation of Thus Spoke Zarathustra has not hitherto been available as a separate book. It has gained general recognition as the most authoritative version existing in English.