Search Results for: who is a terrorist

The contents of this book include: 'On Who a Terrorist Is'; 'Terrorism and Death of the Revolution'; 'Russell on the State and Right to Self-Determination'; 'The Dialectics of Transcendence'; and much more.

THE INSTANT NEW YORK TIMES BESTSELLER. New York Times Editor’s Pick. Library Journal Best Books of 2019. TIME Magazine's "Best Memoirs of 2018 So Far." O, Oprah’s Magazine’s “10 Titles to Pick Up Now.” Politics & Current Events 2018 O.W.L. Book Awards Winner The Root Best of 2018 "This remarkable book reveals what inspired Patrisse's visionary and courageous activism and forces us to face the consequence of the choices our nation made when we criminalized a generation. This book is a must-read for all of us." - Michelle Alexander, New York Times bestselling author of The New Jim Crow A poetic and powerful memoir about what it means to be a Black woman in America—and the co-founding of a movement that demands justice for all in the land of the free. Raised by a single mother in an impoverished neighborhood in Los Angeles, Patrisse Khan-Cullors experienced firsthand the prejudice and persecution Black Americans endure at the hands of law enforcement. For Patrisse, the most vulnerable people in the country are Black people. Deliberately and ruthlessly targeted by a criminal justice system serving a white privilege agenda, Black people are subjected to unjustifiable racial profiling and police brutality. In 2013, when Trayvon Martin’s killer went free, Patrisse’s outrage led her to co-found Black Lives Matter with Alicia Garza and Opal Tometi. Condemned as terrorists and as a threat to America, these loving women founded a hashtag that birthed the movement to demand accountability from the authorities who continually turn a blind eye to the injustices inflicted upon people of Black and Brown skin. Championing human rights in the face of violent racism, Patrisse is a survivor. She transformed her personal pain into political power, giving voice to a people suffering inequality and a movement fueled by her strength and love to tell the country—and the world—that Black Lives Matter. When They Call You a Terrorist is Patrisse Khan-Cullors and asha bandele’s reflection on humanity. It is an empowering account of survival, strength and resilience and a call to action to change the culture that declares innocent Black life expendable.

In the early hours of 2 October 2001, Mamdouh Habib and two young German men were taken off a bus travelling between Quetta and Karachi by Pakistani security officers. It was shortly after 9/11, and only days before the Americans attacked Afghanistan. The Pakistanis, at the behest of the Americans, were rounding up anyone who in any way looked suspicious, interrogating them and passing them onto the Americans. The unlucky ones were then 'rendered' to a third-party country to be further interrogated and tortured, where they either disappeared for good or were sent to Guantanamo Bay, branded as terrorists with no legal rights. This is what happened to Mamdouh Habib. It took nearly three-and-a-half years before he was eventually released without charge from Guantanamo and reunited with his wife and four children in Australia. The original American draft charges had accused him of attending al Qaeda training camps in Afghanistan, and of training the 9-11 terrorists in martial arts. They even suggested he was meant to have been on one of the 9-11 hijacked planes. The true story of the kidnapping and incarceration of Mamdouh Habib first in Egypt then in Guantanamo is told here by him for the first time. The complicity of the Australian government in his abduction to Egypt is revealed, and its subsequent neglect of him while in Guantanamo. His relationship with other well-known alleged terrorists, including meeting David Hicks both in Afghanistan and in Guantanamo, also comes to light. My Story is also the account of a young Egyptian man who migrated to Australia in 1982 in order to settle down and to make a good life for himself. It is about his marriage to Maha, a remarkable young woman originally from Lebanon, who was to become his steadfast companion, and who throughout the years of ordeal tirelessly fought for the release of her husband and the restitution of his name.

‘Am I A Terrorist?’ is a book of poems that starts with a chilling introductory poem of a terrorist who is all set to murder many innocent people in cold blood. However, the terrorist’s plot is unveiled and he is caught by the authorities. He ends up winning a medal for his country at the Commonwealth Games, a feat that brings him laurels. The remaining poems deal with the trials of war, life and optimism, patriotism, humanity and freedom. There is a second section in which the poet brings out her love for Mother Nature, describing how mankind should protect the world they live in, by treating it as a gift and an asset.

Global terrorism has become a frightening reality. The situation calls for greater engagement with the public, as the necessary eyes and ears of the global anti-terrorism coalition. However, to be effective the public must be equipped with the knowledge of how, why, and where an individual becomes a terrorist. This is the primary goal of this set, which seeks to answer one central question: What do we currently know about the transformation through which an individual becomes a terrorist? 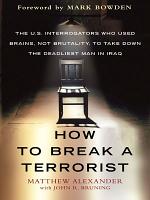 Finding Abu Musab al Zarqawi, the leader of Al Qaeda in Iraq, had long been the U.S. military's top priority -- trumping even the search for Osama bin Laden. No brutality was spared in trying to squeeze intelligence from Zarqawi's suspected associates. But these "force on force" techniques yielded exactly nothing, and, in the wake of the Abu Ghraib scandal, the military rushed a new breed of interrogator to Iraq. Matthew Alexander, a former criminal investigator and head of a handpicked interrogation team, gives us the first inside look at the U.S. military's attempt at more civilized interrogation techniques -- and their astounding success. The intelligence coup that enabled the June 7, 2006, air strike onZarqawi's rural safe house was the result of several keenly strategized interrogations, none of which involved torture or even "control" tactics. Matthew and his team decided instead to get to know their opponents. Who were these monsters? Who were they working for? What were they trying to protect? Every day the "'gators" matched wits with a rogues' gallery of suspects brought in by Special Forces ("door kickers"): egomaniacs, bloodthirsty adolescents, opportunistic stereo repairmen, Sunni clerics horrified by the sectarian bloodbath, Al Qaeda fanatics, and good people in the wrong place at the wrong time. With most prisoners, negotiation was possible and psychological manipulation stunningly effective. But Matthew's commitment to cracking the case with these methods sometimes isolated his superiors and put his own career at risk. This account is an unputdownable thriller -- more of a psychological suspense story than a war memoir. And indeed, the story reaches far past the current conflict in Iraq with a reminder that we don't have to become our enemy to defeat him. Matthew Alexander and his ilk, subtle enough and flexible enough to adapt to the challenges of modern, asymmetrical warfare, have proved to be our best weapons against terrorists all over the world.